Rigid-heddle weavers regularly ask me this question or a variation on this theme, essentially wanting to know if they will reach a limit with their rigid-heddle loom. All looms have constraints. Syne Mitchell, a dedicated multi-shaft loom weaver and author of Inventive Weaving on a Little Loom, talks beautifully about the concept of constraints throughout her work. Constraints exist in all systems and they don’t necessarily create a barrier; they are a fixed state within which you must work. For many of us, constraints are defined not just by our loom type, but by our budget, time, space, weaving desires, and personal predilections.

There is a quick answer and one that takes more time to unpack. The quick answer is that you don’t ever have to get a floor loom to weave what you want. Speaking in broad brushstrokes, there is almost no structure or project you can’t weave on your rigid-heddle loom. It all depends on how you want to approach the work.

The question may not be, “What do I want to weave?” but, “How do I want to weave?” or where do you lie on the mechanical/handwork continuum. Mechanical folks are intrigued by digging deep into weave structures that require complex threadings and weaving sequences and tend to be happy working with a handful of yarn choices. Handwork folks are more interested in simple set-ups, hands-on warp manipulations, and put their focus on the materials they use to weave with. The mechanical folks want the tool to do most of the work and the handwork folks are perfectly happy with a manual approach. Some enjoy the entire continuum, some lean towards one end or the other, and others have their feet firmly planted on a pole.

Both styles exist in the rigid-heddle community, throughout the weaving world, and are not loom dependent. All weavers learn the same techniques of project planning, yarn selection, loom set-up, warp manipulation, shuttle management, and finishing. (This continuum was first introduced to me by Madelyn van der Hoogt as pattern/structure vs. color/texture and has existed in the weaving conversation in some variation for a long time.)

Is My Loom Enough? 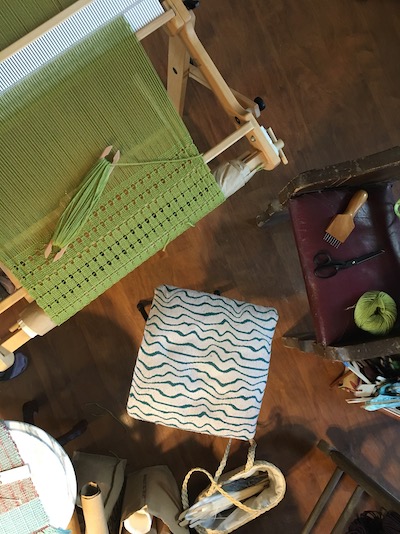 There is a tendency to think that somehow looms with shafts are superior because they can create more structures. There are almost no structures that can’t be created on a rigid-heddle loom and there are multiple ways to create the same structure. For instance, I can create a 1/3 twill by picking up the pattern in front of the heddle, using one heddle and three heddle rods, two heddles and two pick-up sticks, or three heddles.* I can pick-up any structure, no matter how many shafts, on any loom. My handwork is no more or less than a floor loom weaver’s footwork. I say this not with a chip on my shoulder, but a song in my heart. No loom is better than another; the power lies with the weaver.

Many note that weaving is more efficient on a floor loom than smaller looms. Perhaps this is true, but you have to factor in the time it takes to set up the loom and if the loom is able to go where you go. It is similar to the spindle/spinning wheel analogy—one is faster by the hour, but slower by the day. There is value in simplicity and mobility and in complexity and speed.

Weavers often tell me they get shade from other weavers about their loom choice. I think that says more about the weaver making the comment than it does about the loom. I am curious about how all cloth is made. I believe curiosity is the hallmark of a good artisan.

We Live In a Floor Loom World

There appear to be more projects, magazines, books, and guilds that cater to floor looms, specifically Jack looms, and by default the table loom, than there are for weavers who work on other styles and types of looms—tapestry, rigid-heddle, inkle, backstop, frame, Jacquard, drawloom, dobby, and countermarche. The rigid-heddle loom has fared better than most, often being included in the publishing mix and aided by many loom manufacturers improving their rigid-heddle loom designs, making them better versions of themselves.**

Most magazines and books that cater to all, tend to appeal to few, so publishers tend to focus on one area of a craft. Manufacturers make what sells, often collaborating with content makers to improve their sales. In weaving’s case, this focus in North America has been on the floor loom. This isn’t their fault, it’s their job and often their passion. It has fed the perception that a floor loom is the best tool for a weaver to use. It is an analog algorithm.

There are historical breadcrumbs that lead to this focus on floor looms. Prior to the Industrial Revolution, many handweavers throughout the world wove for income. Efficiency and width were important, two things a floor loom, and its cousin, the pit loom, deliver particularly well if you are weaving the same thing over and over again. (I’m thinking of a floor loom as any loom that has multiple shafts—two or more—that are lifted or lowered by treadles.)

Other portable loom styles were used to create cloth for sale or trade by more mobile cultures. However, the early publishing, loom building, yarn stockist, and weaving guild pioneers of the 1940s and 50s in North America, Europe, and New Zealand were pulling largely from European-influenced weaving traditions preserved by an economic imperative that still existed in rural areas and, for the most part, these weavers were using floor looms. The arts community developed a bit differently as the focus is on the product and not so heavily on the tool.

The Times They Are a-Changin’

In the 21st Century, digitally driven world, many weavers weave for pleasure and they want to weave a wide variety of projects on varying budgets with varying amounts of leisure time. It is important to note that throughout the ages, weavers have woven to maintain their cultural identity, an important part of today’s global weaving community.

The internet creates an opportunity for a more diverse approach to weaving. The web provides an easy way to connect with like-minded weavers and offers community mentoring that isn’t reliant on experts, although it has birthed the influencer. Hashtags allow you to easily find weavers who weave like you, regardless of their loom. The popularity of frame-loom weaving has raised the profile of small looms and allows weaving to show up in more spaces. Weavers who’ve had no other landing place, create their own hubs supporting the styles they love. Weavers from diverse communities throughout the world are more visible, talking to us in their own voice, changing our perception of who weaves, why they weave, and on what type of loom.

Weaving does have a looooong tradition of self publishing in niche areas and fostering small centers of distribution. The internet is making it even easier for niche publishing to flourish, and inversely, more challenging for large publishing houses to survive. This is giving rise to more resources for more types of weavers weaving on more types of looms. If Mary Atwater were alive today, she would be all over the web. (And, I might add, vocal on more subjects than weaving; she was not one to hold back her opinion on anything, particularly politics. Her feed would be molten lava.)

Personally, I have forgone my floor loom, where I started my weaving journey, in favor of smaller, more portable and affordable, looms. I originally harbored the idea that the floor loom was the ultimate loom to have and master. I have found the rigid-heddle loom is no less powerful and much more accessible. I am far more productive with a rigid-heddle loom than I ever was with the seemingly more efficient floor loom. The rigid-heddle loom makes me nimble, providing me with the perfect balance of handwork with mechanical assistance. My sweet spot is two looms—a narrow 10” loom and a wider 25” loom with a double heddle block on a stand. With these two looms, I can weave anything I want, in practically any yarn I want, in any way I want, and in any space I want to be in.

I’m not sure that I’ve satisfactorily answered the question, but I hope I have provided a framework for you to answer the question for yourself. Stay curious and you will find your forever loom or looms; you can never have too many. 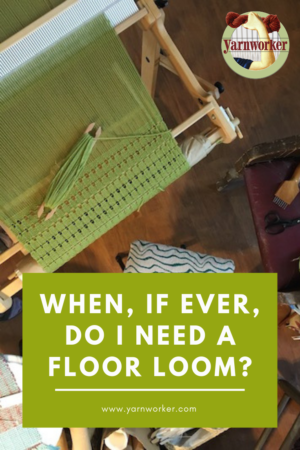 *For those who are interested in the relationship between floor looms and rigid-heddle looms, I have a video on my YouTube channel that that talks about the relationship of shafts, drafts, and the rigid-heddle loom using the 1/3 twill as an example. Also, David Xenakis has generously made his seminal publication on the construction of four harness textiles using three heddles available for free. I’m prepping to launch a new weave-along tackling the same project: napkins, woven two ways—one with a single heddle and one with a double, it is a perfect time to dip your toe into the many ways you can weave a similar cloth, differently.

**Anni Albers makes an interesting note about the rigid heddle in the chapter on the development of the modern loom in her book On Weaving (page 7-8). “However, mention should be made of a cleverly conceived implement that, though not incorporated in the modern inventory of equipment, is interesting as another attempt at producing shed and countershed by the simplest means. This is the free rigid heddle.” She is writing this in 1965.  As far as I’ve been able to determine, the rigid-heddle loom is is essentially a 20th century invention, exactly when the first one was made, I’ve been unable to determine. I suspect it was prior to 1965, but perhaps not widely available. The loom we call a rigid heddle, combines the free-standing rigid-heddle used backstrap style, and the tape loom box to create today’s modern rigid-heddle loom that sits in a specialized frame and comes in a variety of sizes. I’ve reached out to folks who are knowledgeable about loom history and we still haven’t been able to determine a satisfactory first date or loom manufacturer for the rigid-heddle loom as we recognize it today.

Edit to add: A few weavers have been sending me dates for their vintage rigid-heddle loom. The oldest yet is a 1957 Spear’s rigid-heddle loom made in the UK. Anyone have a loom that was made earlier than that?