I grew up in and around all kinds of stages and studios. My parents were into the theater scene big time—as actors, backstage hands, and promoters. I lived for a short time in a dinner theater dressing room. I served as my mother’s dresser. I did the voice over for a ghost in Blithe Spirit. I was the littlest Indian in Annie Get Your Gun. I sold concessions, painted sets, and even had a starring role once or twice. Sometimes I played these roles willingly, other times I would rather have been playing with my friends. Such is childhood.

My mother worked for the local TV station where I would go after school and hang out on the set waiting for her to finish up for the day. There was lots of waiting, so I observed lots of producers, cameramen (they were all men back then), script writers, audio engineers, and editors of all kinds at work. Later, she branched out into radio and I spent time in those studios. I did my homework at the end of the family’s bar where many employees were involved in some sort of roles in the arts such as musicians, writers, and poets. They liked to talk and I liked to listen. In high school, I joined the radio drama club and became fascinated with creating sound effects. I worked as a docent in living history settings and at the theater. None of this felt like preparing for a job, but in fact, it was.

What these formative experiences gave me was not a comfort in front of the camera—a place where I am almost never totally comfortable—but an ease with what goes on behind the camera. 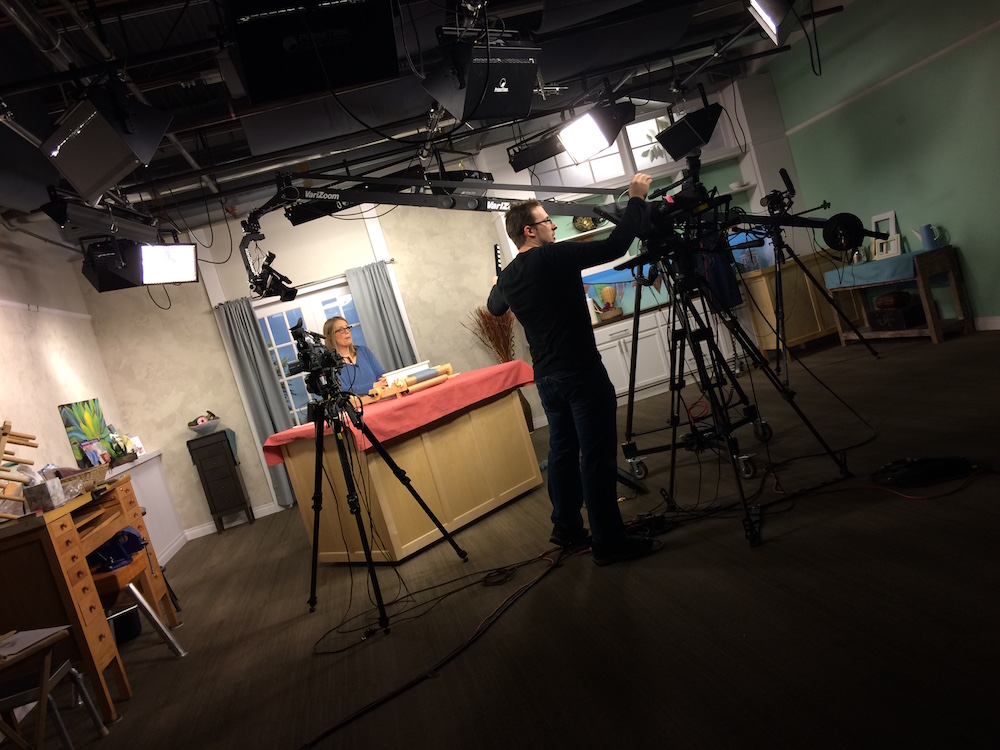 Video production involves a great deal of teamwork. The preproduction team works to find the right person for the job and keep them on track. This starts with the acquisitions editor who sifts through the proposals or trolls for “talent”. Talent is the term for “who will be in front of the camera”, but the name is misleading as they are certainly not the only talent in the room and sometimes not even the most talented.

If you are lucky, there is an instructional designer who works with the talent to make sure they are on course with the learning objectives, that she has a handle on what will be valuable to the audience and can articulate its value, and that all possible step-outs are prepared ahead of time so you don’t waste valuable studio time making stuff, when you should be teaching stuff. 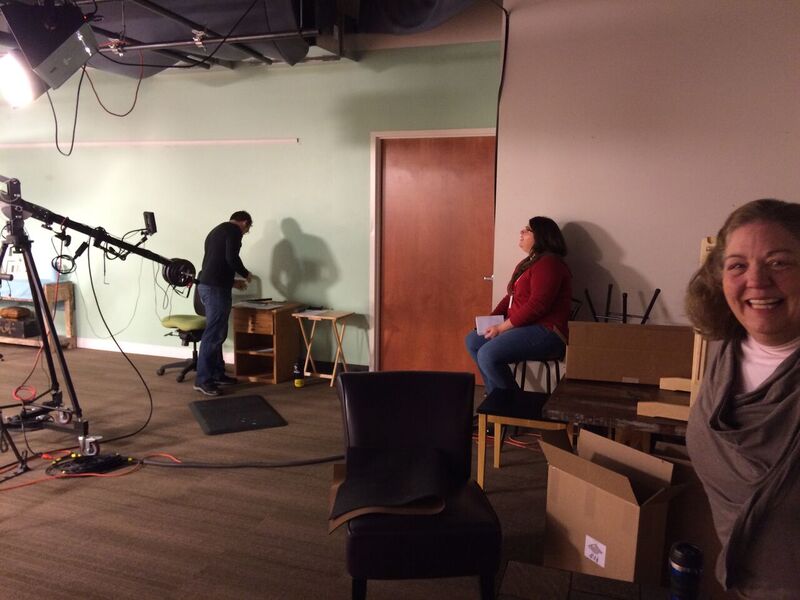 There is the production coordinator who takes care of logistics—booking studio time, make-up artists, making travel arrangements, helping the talent stay focused on the task at hand and is where she is supposed to be. There are shooters who manage the cameras and make sure the action that needs to be seen, is seen.  The shooter is backed up by a producer whose role it is to make sure the right content is being captured. (A fun note: the producer would be the person to call the cuts to the different cameras during filming if the rough edits were happening in studio or the action was being shown live, hence the term “calling the shots”.)

As talent, your job is to talk to the big black gaping hole of the camera and connect with the viewer. It helps if they put a friendly face on that camera or a note that says “smile!”. You also have to articulate where you are going to the rest of the folks in the room before the cameras role and be able to take feedback and direction. Wild hand gestures or throwing things about cause no end of trouble so you have to be conscious of your hands as you work. 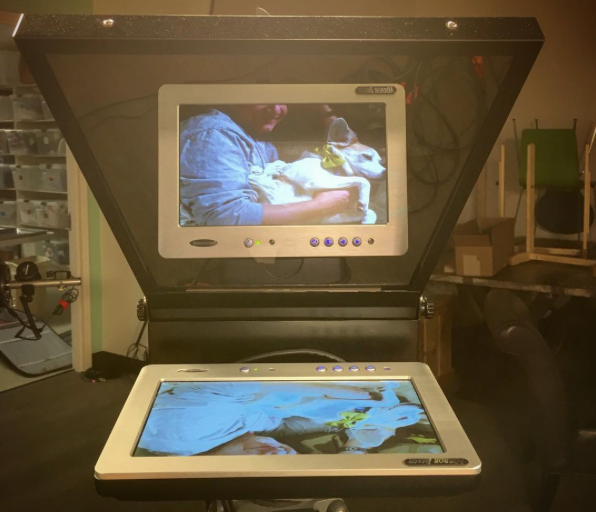 I prepare for the shoot by trying to figure out the storyline—how to find the best way to get you from the beginning to the end. What is going to be most useful to the user? How can I translate that into a class that is appropriate for this medium so the learning is easy and fun?

The tendency is for me to want to dazzle with all sorts of clever tricks, but that is probably not the most useful thing to you. I’ve learned over the years that less is more. Giving you a solid foundation in the fundamentals of a subject is my thing. Making you laugh along the way is a bonus. I also have to create one or two objects that you might want to make or feel is aspirational. 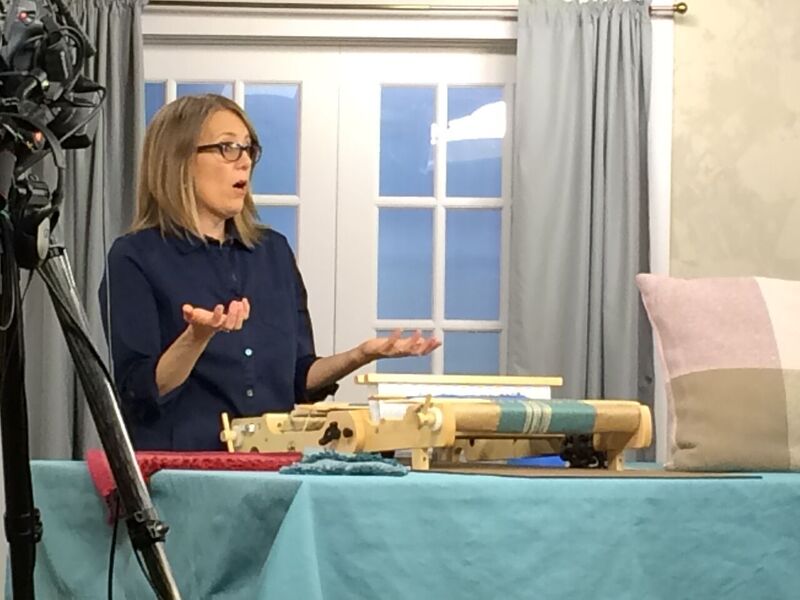 Postproduction is where, if everyone else has done their job, the editor gets to shape the work into a cohesive whole. It helps greatly if the production team also includes sales and marketing in the process so they have a feel for what they are promoting.

At one time or another in my life I have played all of these roles.  When producing my own videos or videos I produce for other people, I often do perform all these roles myself. I often get placed in front of the camera, not for my great skills as talent, but because I have such great respect for those who are behind it.

P.S. Twice As Nice: Weaving on Two Heddles is scheduled for release in late March and Double Your Fun: Doubleweave on a Rigid Heddle Loom will be released in May.

1 thought on “There is a Method to the Madness”