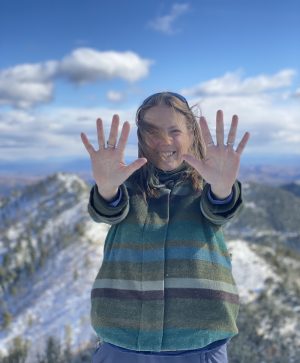 In November, my desktop started giving me trouble. I couldn’t tell if it wasn’t happy with the latest operating system upgrade, or if I was dealing with a corrupt file. My bluetooth was cycling on and off, which made me think it was a hardware issue, but I wanted to rule out software or file issues. Hours on call with various support agents led me to believe I was probably right, it was a hardware issue.

I drove it to the closest Apple Store and had them run a diagnosis. Yep, bad hard drive. My computer is about two years away from being vintage, such an odd term for something four years old. I had a choice, get a new computer or replace the hard drive.

I hate the amount of electronic waste necessitated by keeping on top of technology, but I’m also careful about my online hygiene and can’t afford a lot of down time. I am in the middle of a big project, and thought if I can get another year out of this machine, I’ll feel better about my carbon footprint and I could prepare financially. I had them plunk in a new hard drive.

After I got it home, I booted my machine up, then attached my external hard drive to reload my files. The thought that I should clean up my files before doing so crossed my mind, but like the messy drawer, who has time for that?

Nothing. The computer didn’t recognize my hard drive, so I tried some other drives. Nope, didn’t recognize them. I tried them on my laptop. My laptop recognized all but the main back-up drive. That’s when I heard the rattle. The USB connection had come loose. After some further research and a bit of emotional back-up from my spouse, I figured out how to open the case around the external drive to release the part that had become detached. 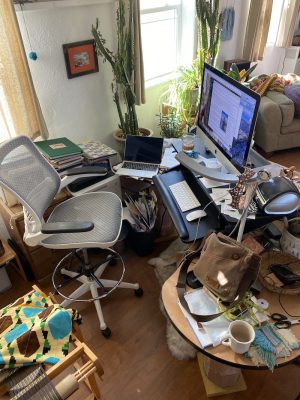 I decided soldering was not really in the cards for me. I did some more research and found a port that I could plug my hard drive into directly. But the writing is on the wall. I need a new computer.

This was kind of soul crushing work, which sounds a bit extreme. (Tech support was one of the main things that kept me from being a freelancer. That, and shipping. Look at me now.) I was frustrated by all the lag time between diagnosing calls, driving hours away to get repair help, and running into peripheral problems like inefficiencies created by moving between desktop, laptop, tablet, and phone. I have content to create, and the disruption to the roll I was on is hammering my psyche.

After weeks of mucking around, somehow the USB port failure and figuring that out gave me an immense sense of accomplishment and allowed me to relax a bit. Instead of just junking the computer, I worked the process to know what I was really dealing with. I feel really good about my decision. It wasn’t the most expedient, but it came with a certain amount of satisfaction. Computers are based on weaving technology, so you could replace the word “computer” with loom [hardware] or cloth [software] and come up with a similar story in your life.

My natural predisposition is to make do with what I’ve got. Our natural dispositions are not always the ones we need. We have to create other dispositions to do the things we want to, or have to, do. Generally speaking, we only have about three hours of fresh brain power a day. Being a product of my culture, productivity is deeply ingrained in me, which is not necessarily a good thing. Globally, the pandemic has revealed how much is sacrificed to be productive. I have a routine, which helps me maximize my specific predisposition—use those three hours well, and then move onto other tasks that don’t require that kind of quality brain power. However, life does not always allow us to work within our optimal flow, so when it is interrupted, tasks can get away from us quickly.

Personally, I have a tendency to ignore my body and brain fatigue by fueling them with adrenaline, caffeine, and chocolate, thinking a good hike will counteract the hype, but it doesn’t. It is not a sustainable way to live. My body tells me things my brain won’t accept. It helped me quit my job and dive into freelancing when it couldn’t endure hours of driving or standing in a film studio. It helped me step away from the loom when I thought I could just keep weaving and the cloth would be okay. It told me that one more hour at the computer was only going to lead to diminishing returns. The afternoon anxiety-fueled mental loop tells me I need to stop.

November is my birth month. I love that it comes at the end of the year during the grand season of reflection. This is what 55 looks like to me. I can do the things I really want or need to do, while the other stuff I can ignore, which is really not age-specific, but I somehow do this in a more age-specific way. I’m no longer procrastinating or lazy, I’m making a choice. Balance is prioritizing some things at the expense of other things.

I get that there is a large amount of luxury in this life. My body, for the most part, works as it should, granted, it is slower, creakier, and requires more maintenance, which I can afford to give it. I have support to make this life work. Over the decades, I’ve worked towards a life where the things I like to do or can sustain me don’t require as much money as they do time. Taking time is a notion I often feel I can’t afford, but to ignore time is to pay a different kind of price.

I can’t go about life in the way I used to, and this is, for the most part, a good thing. Age allows me to recognize the moment I am in, without letting it cascade by me. I see it for what it is, a moment that will not happen again.

13 thoughts on “The View From Here”