The direct method was first popularized by the late, great Anne Field in her book Weaving with the Rigid Heddle Loom published in 1980. Although it is a centuries-old technique, Anne brought it back to many weaver’s attention.  It further gained popularity with the publication of The Ashford Book of Rigid heddle Weaving by Rowena Hart in 2002.

Even though the direct method is faster and involves less equipment, I choose the indirect method nine times out of ten, because I’M LAZY and I like to warp sitting down. 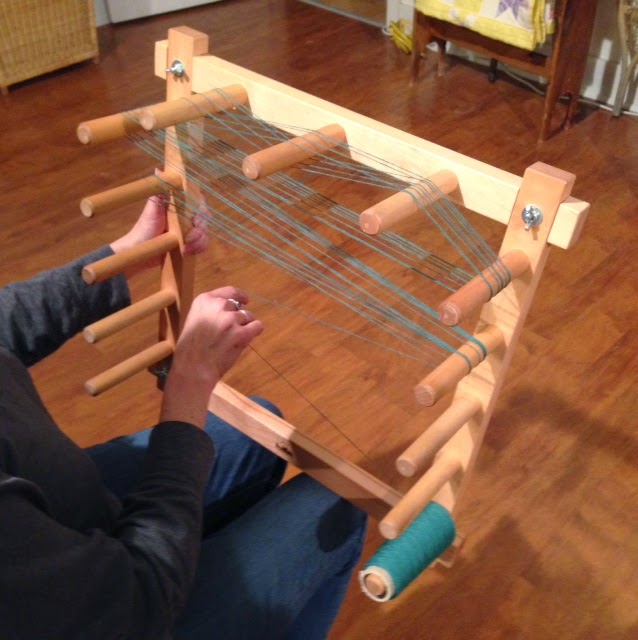 I do most of my weaving in the evening when I’m ready to sit down and relax. I prop the warping board in my lap to measure the warp.  My favorite board is Schacht’s 4 1/2 yard warping board because it is easy to hold. If I get interrupted it is easy to abandon the work and pick it up later.  I don’t find abandoning a direct warp easy to do since it is usually in the way of general traffic and if I don’t get back to it, the grumbles start. Then I take the warp to the loom, either on a stand or on my lap, and thread the heddles and pack the back beam. Then it is onto weaving and finishing.

Just as with knitting where there is more than one cast-on, there is more than one way to warp. That’s why I offered up three different ways to warp your loom in my first video Slots and Holes—direct, indirect, and two heddles using the indirect method. The indirect method is a good one to master, particularly if the warp is long, fine, or has a complicated color order. I admit that it has its drawbacks.  If you miscount your warp ends, you have to wind more ends.  It also takes longer. However, I tend to weave more, because I put off warping if I have to do all the set up for the direct method.

Don’t get me wrong, the direct method is slick and you are probably better off for learning it first.  I happened to learn the indirect route first and we tend to like our first ways of doing things.  We both get to the same place in the end.