I’ve been thinking a lot about drafts lately. As many of you know, I am in the process of writing a new guide to the wonderful world of weave structure with the rigid-heddle weaver in mind. It is humbling and overwhelming work and I am eternally grateful to the Yarnworker Patreon community for giving me the space to do it.

My goal isn’t just to teach you translation, but also provide you with some transcendence. A book to add to the conversation about what makes our loom of choice unique, its constraints, and why (and how) we can achieve certain structures in different set-ups—one, two, or three heddles. It will include a robust theory section including drafting for the rigid-heddle weaver and creating rigid-heddle threadings and shed configuration for a variety of weave structures, including a discussion of block weaves—yasssss, we have more than two blocks available to us. Also included is a bit about loom mechanics and practical matters of setup followed by a series of lace, twill, doubleweave, Summer and Winter, overshot, Monk’s belt, and other structures for you to put theory into practice. This is not a project book, rather like my other guides, a resource. With it, we can launch into next gen weave-alongs.

In advance of the publication, slated for later this year, I decided to get out of the big writing and offer a few blog posts relating to weave structures in the rigid-heddle landscape. l’ll start with taking a bird’s eye view of drafts. This is a lot of abstract information. For those that have already begun to delve into this cross-loom communication, or are beginning to do so, perhaps this global view of the architecture of a draft independent of shaft speak will be helpful.

What is a Draft?

A draft is a graphic representation or chart that outlines how to setup a loom and weave a specific weave structure, or the underlying interlacements of warp and weft, with such names as plain weave, twill, lace, etc. Weaving is based on a binary system—a warp end is either up or it is down. When a warp end is up, the weft yarn travels under it, when it is down the weft thread travels over it, determining the look of the structure.

A draft is designed to put a lot of information in a very small space. It communicates how to set up the loom so the weaver can achieve the binary conditions to create a structure or an entire projects. Each draft is created based on a specific loom type and they differ from loom to loom, much like how a chart designed for crocheter might look different from a chart designed for knitter. (You either love charts or hate them, but they are a powerful tool either way.)

Most rigid-heddle pattern use words or simple charts to illustrate the setup and they don’t rely as heavily on drafts. The vast majority of drafts the rigid-heddle weaver will encounter are not written for their loom. Using them is like asking you to know Portuguese before you learn Italian. They are related, but each loom system has their own unique set of constraints. Drafts are not a universal language between loom types, a draft is directly related a specific loom type and the cultural understanding of that loom. Rigid-heddle weavers can certainly use them, but first we have to understand what it is they are trying to tell us.

When it comes to drafts, the words used to describe them relate to other loom types. Here is a brief look at the architecture of a draft with a rigid-heddle weaver’s world view in mind. It doesn’t include any of the specific information you are used to seeing, but rather looks at what each quadrant is communicating and how they relate to one another. This is not meant to change the language, just explain setup of a draft in terms that speak to our little world of the universe. More to come! 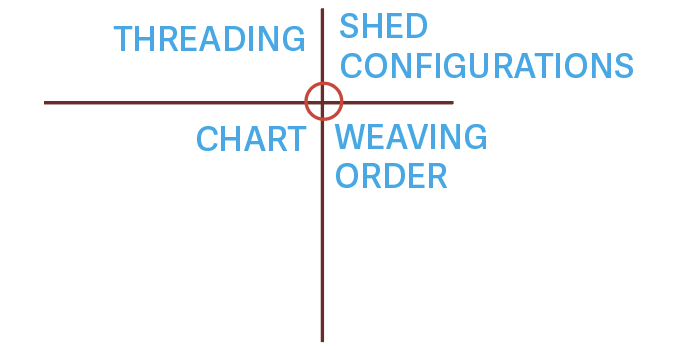 The weaving order in the lower right quadrant illustrates the order in which you weave each shed. Known as a “treadling” in shaft vernacular or sometimes a lift plan, which can include the information for sed configuration as well. A rigid-heddle weaver neither steps on anything more do they only lift, sometimes they lower in order to get the right ends on the top of the shed. With our birds-eye view, no matter the loom, that quadrant tells you the order in which to weave your sheds, how you do that once again depends on the loom.

Perhaps the most confusing part of reading a draft is the direction in which you interpret it, which can vary based on the quadrant setup. It isn’t always intuitive to those of us who are programmed to read from right to left, top to bottom. If you are directionally challenged like me, it can cause your brain to fritz from time to time. Mastering these changing directions comes with time.

The origin of the draft, where the two lines meet is marked with the red circle.  It determines how each quadrant of the draft is read. The reading direction radiates out from this intersection. 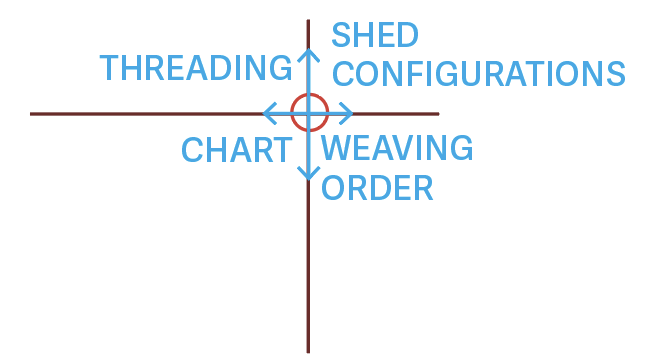 The reading direction follows the blue arrows. In this set up:

Threading is read from right to left, bottom to top

Shed Configurations are read from left to right, bottom to top

Weaving Order from left to right, top to bottom

Chart is read from right to left, top to bottom

The reading direction doesn’t mean you can’t use the information working from a different direction, for instance, thread your loom right to left, rather this orientation point of the draft indicates how the creator of the draft ordered the information, and you want to maintain that order.

It is common to see drafts without a chart. To create a chart in this setup, start with the weaving instructions and work counterclockwise between the quadrants (red arrows). As you work from quadrant to quadrant, you will still follow the direction of the blue arrows to read the information in each individual quadrant. 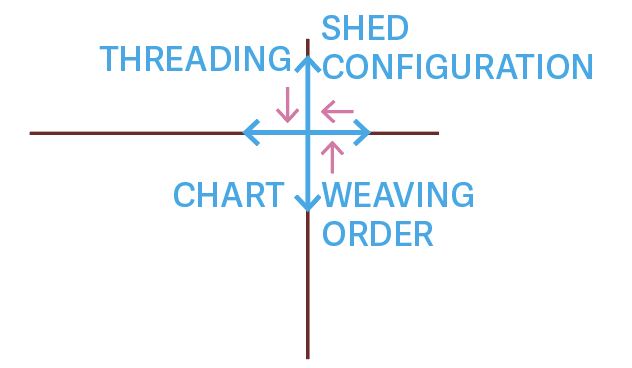 Setting Up The Loom

When setting up the loom using this configuration of quadrants, read the relationships between each quadrant clockwise (green arrows), starting with the threading (green arrows). As when forming a chart, you would read each individual quadrant in the direction indicated by the blue arrows. 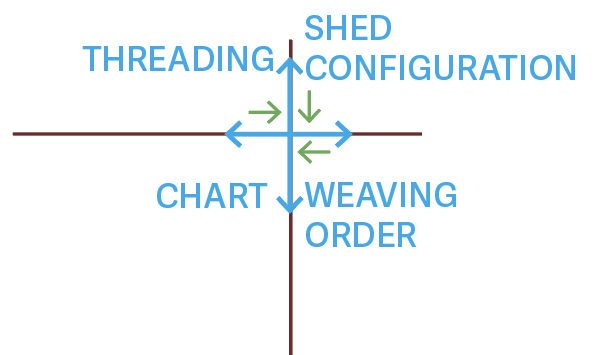 The draft setup we have looked at so far is one of the most common in American handweaving literature. While English readers may find it awkward to read the threading from right to left, the shed configuration and weaving orders are more intuitive since they are read from left to right.

You will encounter drafts where the quadrant setup is different. In the upper right is the configuration we have been working with. In each of the other setups, the quadrant assignments shift. You still read each individual quadrant from the origin out, but the direction you read the relationships between quadrants is relative to where they are positioned. This change in orientation also determines if the chart is formed from the top down, a drawdown, or the bottom up, a drawup. Different traditions and loom styles lean towards one setup vs. another, but they all still contain the same information. 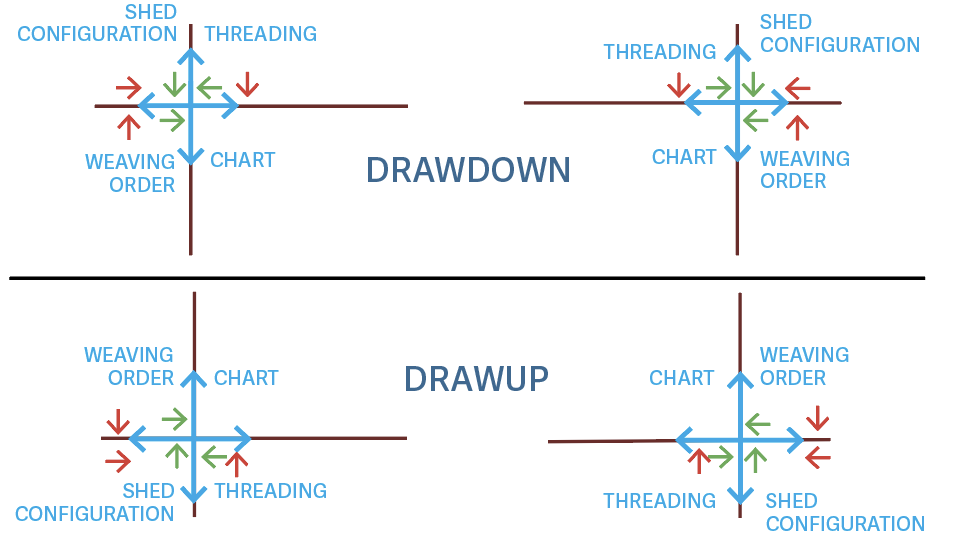 My brain is a bit bent from building a bridge in words between structures, the rigid-heddle loom, drafts, and shafts, so if you are feeling it, too, you are not alone. I have a video on my YouTube channel that demonstrates some of these principles and a bevy of resources that are already out in the world on my website. Some of the most popular resources on translating drafts are the Xenakis technique and David McKinny’s book, both focusing on three heddles. If you are a visual person, Amy McKnight has a series of videos on her YouTube channel about multi-shaft techniques on the rigid-heddle loom.

6 thoughts on “The Architecture of a Draft”

This site uses Akismet to reduce spam. Learn how your comment data is processed.