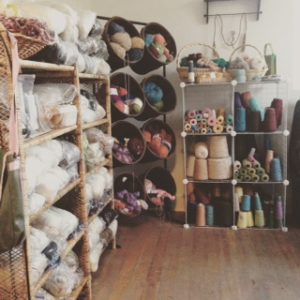 After traveling for the past four concecutive weeks, I have been in dump-and-run mode. This took its toll on my yarn space. I’ve never really put this room to rights since we moved into our new home last July. Coming home to a pile of deadlines meant one thing-cleaning the yarn room was suddenly the most important thing to do.

I know I’m very lucky to have an entire room for my yarn, fiber, looms, dyes, and other textile necessities.  I haven’t always, so I practice gratefulness whenever I am in this space or even apart from it.

While I was excavating the floor, I came across all my class notes from my two semesters of wool science at Lincoln University on the South Island of New Zealand. I remember vividly being overwhelmed by the coursework. I spent a lot of time analyzing numbers, something I like to do except in this case I didn’t have much context.

My past experience with sheep was limited. I knew what a sheep was, that it grew wool, and that I liked to work with that wool. I had gone to sheepdog trials and spent loads of time in the sheep barn at the county fair in my youth. I had worked with shepherds on the Navajo reservation, but I had never managed a herd of sheep.  The closest experience I’d had was the family flock of chickens. 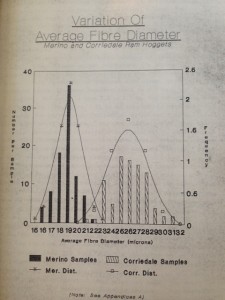 Monday – Thursday, I would sit in lectures about genetics, desirable and undesirable traits and how to predict them in a breeding population, wool faults and how to prevent them, feeding protocols, and the like.  On Friday, we would go into the classing barn and get our hands dirty skirting fleece, identifing faults, measuring microns and staples, practicing breed identification, and any other number of seemingly incomprehensible-to-me (at the time) task.

The page shown here is from my final report for one of my classes. I found notebooks with yellowing staples I pulled during a final exam where I was thrown in a room with mounds of fleeces, and I had to identify the breed and find ten wool faults. Looking at these notes now they make so much sense, but I was hanging on by a thread at the time. I have learned so much in the past twenty years. If I could take those courses again I would rock them.

Learning takes context, but you can’t get context without learning, be it in a classroom or out in the pasture. That is the irony of life. A lot of what I do as a weaving teacher is about guiding want-to-be-weavers through the process of wanting to know so much and being totally overwhelmed.  Its nice to be standing at the blackboard after a few decades of being in the seat.

If you would like to experience a little of what I’ve learned in the past few decades working with wool, join me at New York State Sheep and Wool, where I’ll be teaching spinning singles for weaving. There is only one seat left in this class, but there are seats available in the second section of Weaving 101 and Become A Pick-Up Artist.