We are in the midst of the Spring 2018 Yarnworker Weave-Along, weaving the Linen Facecloths from Handwoven Home. This project provides all sorts of interesting challenges for new and experienced weavers alike by weaving windowpane with linen, using multiple colors in warp and weft.

The thing I love best about the weave-along process is that I continually get to see my craft anew through others’ eyes. During this particular weave-along, I was asked, “Why doesn’t the pattern say ‘neutral and pick-up stick’?” It is an excellent question and I thought I would share the answer here. Let’s start at the beginning and work our way toward this question so you have some context for the answer.

Reading a pick-up sequence is one of the skills a weaver will eventually tackle to become fluent in their craft. Pick-up patterns often look like insolvable puzzles, but with a little know-how, its mysteries are made plain. I cover the basics in the Pick-Up Stick Primer, pages 27-28 of Handwoven Home and take a deep dive into the subject in Weaving 301 at the Yarnworker School.

On a related note, much like worsted can mean a weight of yarn or a spinning process, the word “pattern” can also cause confusion. Pattern can mean the project instructions or the appearance of the woven cloth. Pattern is different from structure, which is the interlacement of the threads. The “structure” here is windowpane, the pattern is both the appearance of the fabric in this structure and the step-by-step instruction on how to weave the fabric.

The first thing the pattern will tell you is to “charge”, or otherwise set up the pick-up stick. To do this, but the heddle in the down position and pick up only the slot yarns as instructed. The instruction may say something like “2 up and 2 down, starting and ending with an up” or it may just say, “2 up/2 down”  Some find it helpful to put a piece of paper or another pick-up stick in the shed so it is easier to see which thread you are picking up. 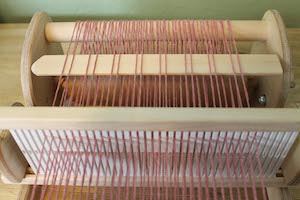 “Up” and “Down” most of you have down pat. You place the heddle in the up position when the pattern indicates “Up” and in the heddle in the down position when the pattern indicates “Down.” In both of these positions, the pick-up stick must be pushed all the way to the back of the loom so as not to interfere with the up or down shed.

Up and Pick-Up Stick

“Up and Pick-up Stick” indicates the heddle should be in the up position and then the pick-up stick is slid to the back of the heddle. The action imparted on the yarn is both the “up”, which lifts the yarns threaded in a hole, and the “pick-up stick” which lifts the picked up slotted threads on the stick. This action creates a warp float. 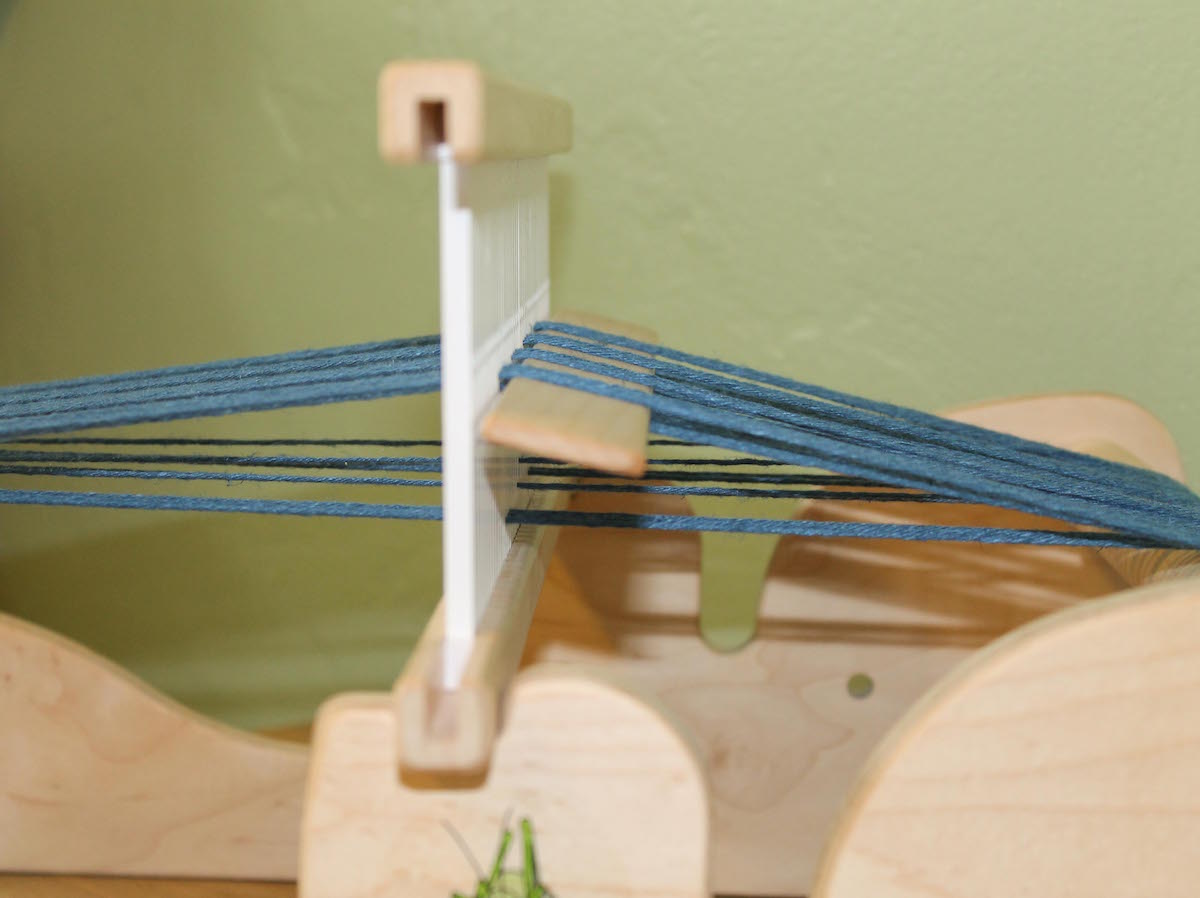 “Pick-Up Stick” indicates the heddle should be in neutral and the pick-up stick tipped on its edge. This lifts the slotted threads on the pick-up stick above the rest of the warp, creating a weft float. The instruction is indicating the action that is being applied to the yarn. Here we come to the the answer to our weaver’s question. Since “neutral” by definition has no effect on the warp, neither lifting nor lowering it, the action is implied. 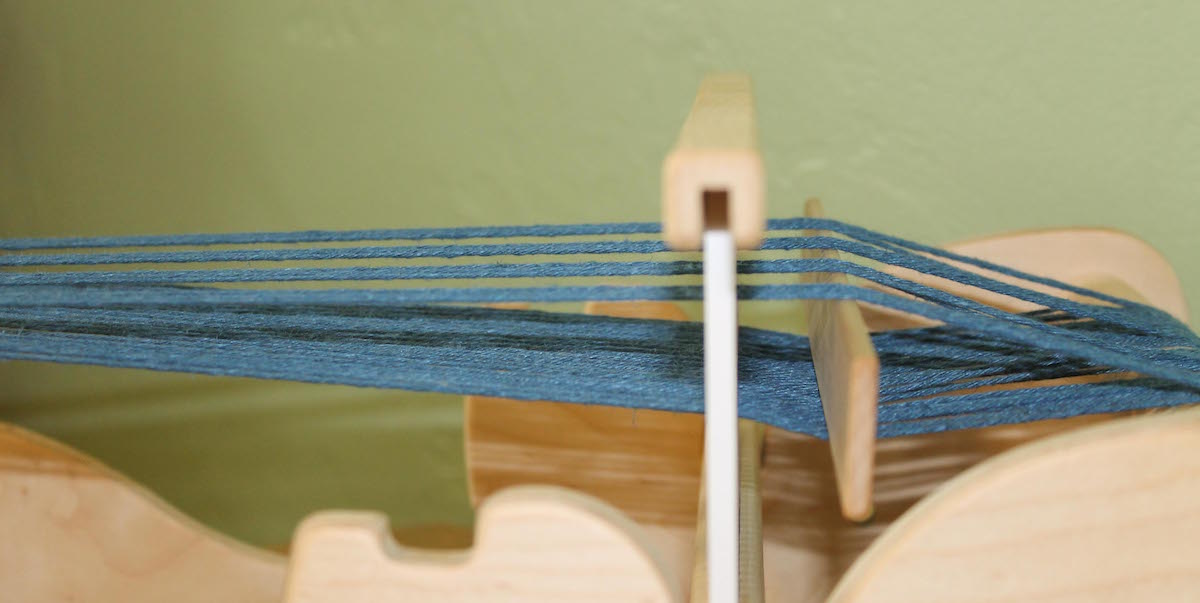 You would follow this sequence for the recommended number of repeats or length the pattern tells you, placing the heddle and stick in whatever position is indicated in each of these six steps. To make the pattern look balanced, the instructions may indicate that you weave a final partial repeat.

The results look like this. I am using color strategically in warp and weft so the floats are a different color from the rest of the cloth. I’m also using a finer yarn in the cells to further differentiate the plainweave areas. 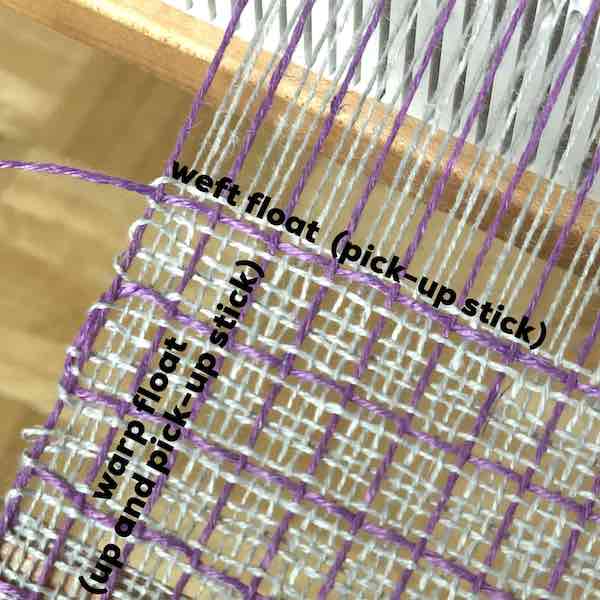 Written patterns always assume that you know things and my mission is to help you feel confident that your know-how is up to the task. Weave-alongs are a great way to follow along with other weavers as we tackle a project together. It is the unexpected learning opportunities that make them so valuable.

There is still plenty of time to join in the weave-along. Although the official end date is July 3, the information is free until July 31, 2018. As long as you are registered before then, you can access the information 24/7 at no charge thanks to the generosity of the Yarnworker Patreon community.

And, stay tuned, pick-up is the next class from the Yarnworker School we will cover all things pick-up.

3 thoughts on “Reading a Pick-Up Pattern”