It doesn’t happen as often as you might think, but it does happen. Fixing a broken warp end is a relatively easy fix. To do this you will need to incorporate a supplemental warp yarn. Over the years my thinking has evolved on how to do this. The fundamentals haven’t changed, but how I manage the overlap has.

You will need to gather a small tin or lidded bottle, mint tins and pill bottles work well, small weights such as pennies or small nuts and bolts, a tapestry needle, a t-pin or something similar, and a piece of warp yarn the same length as your warp. Even if you have already woven a considerable amount of cloth, you will want a pice of yarn the same length as your warp, loom waste and all.

Start by leaving the tail of the broken end in place in the cloth you have already woven, and remove the other end from the heddle and toss it over the back beam. 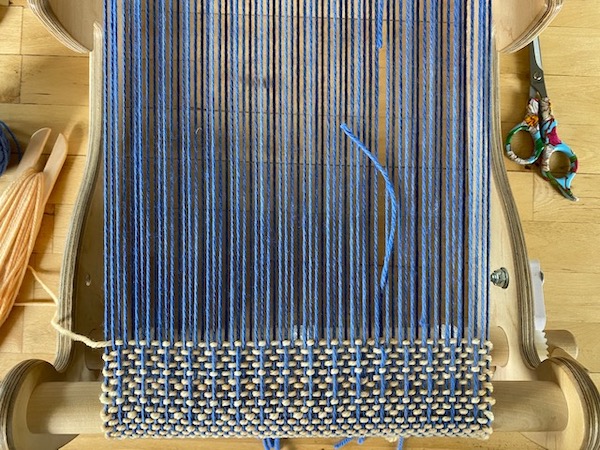 Wind the length of warp end you cut into a small coil and place it in the container with the weights, leaving tail the same length of yarn that you have already woven, plus fringe and an additional 20’’ tail hanging free. Close the lid to secure the contents. You can adjust the weight and tail lengths as necessary after you have secured the warp end. 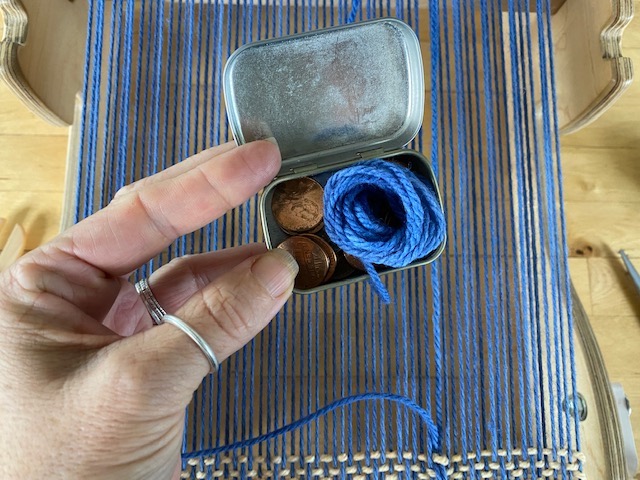 Place the tin behind the heddle on the table top. If you are working on a stand, you can support the tin on the warp. Thread the tail of the warp yarn on a tapestry needle and bring it through the slot or hole where the broken end was threaded then needleweave it into the cloth following the path that the broken ends is taking. 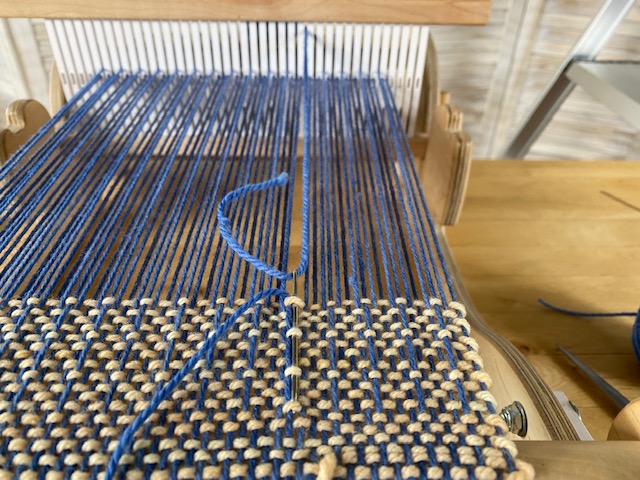 Pull the tail through the cloth and secure the end on a t-pin. Needle weave the t-pin in such a way that the head with the wound tail lines up approximately where the broken end is. It doesn’t have to be in exact alignment. Shown here is the pinned supplementary warp end and the tail of the old yarn. This break is fairly close to the Strat of the cloth. Your tail may be longer if your break is further along in the process. (Certainly at this point I could needleweave the supplemental yarn all the way back to the apron rod and tie it on, but for the sake of a general overview, I’ll carry through this example as I would if the break happened further along.) 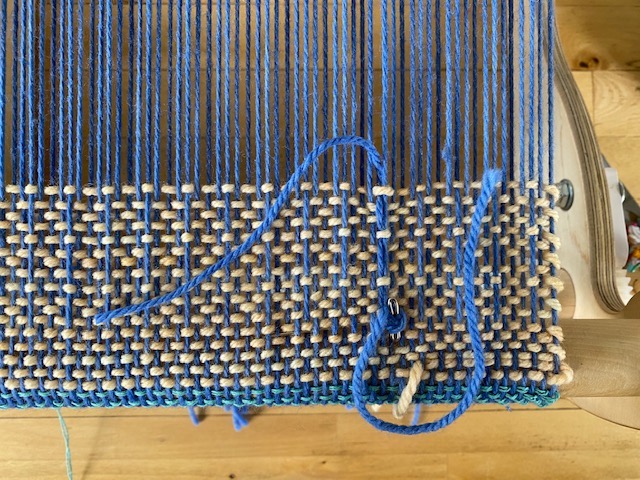 Once the tail is secure, hang the tin off the back of the loom to weight the supplementary tail end. If the end has too much or two little tension you can add or remove the weights. Continue weaving. As you advance the warp, remove extra warp length from the tin and reposition. Once you have woven a four or five inches you can remove the t-pin before it is wound onto the cloth beam. If you have a particularly long tail, jus the mindful the it doesn’t snag as you wind onto the front beam and skews your cloth. 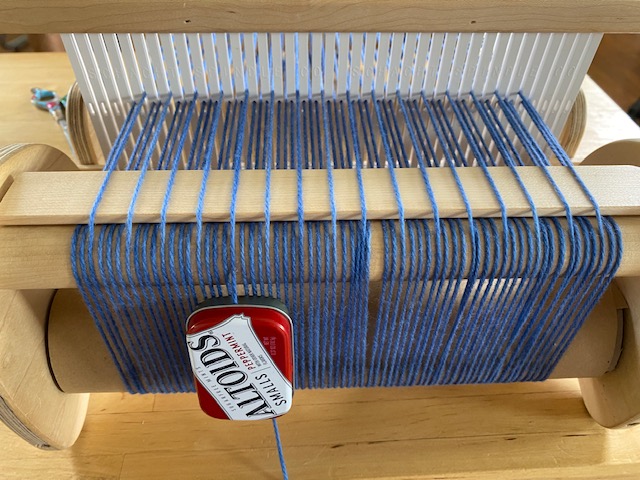 This is where my thinking has evolved. I used to leave the overlap of the old and new warp end in the cloth, just as I would a weft join. Depending on the placement of the join and the thickness of the yarn, it really isn’t that noticeable. I also will sometimes reverse engineering a ply split join to smooth out and secure the overlap.

This is still an option, but what I mostly do now, is once the cloth is off the loom, I’ll pull out the length of broken warp yarn still in the cloth, and needleweave the supplemental yarn tail in its place. This gives me a new uninterrupted warp end from one end of the cloth to the other.