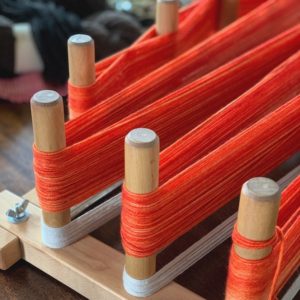 My teaching philosophy is pretty much summed up this way: If it works, then do it. If it stops working, try something else. When it comes to warping, there are so many ways to get the job done—from the super speedy direct method that uses a peg, to the little bit less speedy and versatile indirect method where you use a warping board or pegs. Within these two methods, there are multiple variations that you can employ depending on your circumstances.

With so many methods how do you know which one to pick? There is no one size fits all. We tend to like whatever method we learned first. As our weaverly muscle grows, we learn to adapt and expand our method to suit our needs.

Following are different warping configurations and how you might go about deciding which method to use.

These are your no-fuss, pretty straightforward, nothing-to-see-here warps that you can use almost any method to warp. I personally use indirect warping because I don’t love my set-up for direct warping.

If you are winding a warp of more than 15 inches wide and using the direct method, you may want to use more than one peg or move your peg so you don’t foreshorten your warp by creating too steep of an angle from the peg to the apron rod. The steeper the angle, the shorter the yarn travels from rod to peg. If you have a copy of my book, Handwoven Home, see page 148 for more tips on wide warps.

With the indirect method, I’ll wind my warp into two or three separate chunks and tie a separate choke tie on each, so that I avoid those steep angles from beam to rod as I’m threading my heddles. (Choke ties are used to tie the warp to the beam and keep the yarns from slipping past each another while threading the rigid-heddle reed.)

The indirect warping method keeps your warps in a compact space. Long, wide warps in particular, take longer to warp, and storing the warp on a board makes it easier to stop and start.

You can can also use the hybrid method, using the warping board or a peg system to keep the warp in a compact area while working the direct warping method. We explored this in our first weave-along in the school which will always be free.

However, a bonus of direct warping is that you never bend the warp, so it is already aligned when you go to pack the beam. By using a warping board or pegs, you are bending the warp, then straightening it out again, which can allow more opportunities for snags. A little bit of know-how makes these manageable, but it is worth mentioning.

Either method will work. For direct warping, this is the easiest way to start adding multiple colors to your warp. Because the direct method is worked using a paired system, it works well with even-ended color orders. You are pulling through loops of yarns through slots that will eventually become two warp ends and there is no rearranging in the rigid heddle to be done. 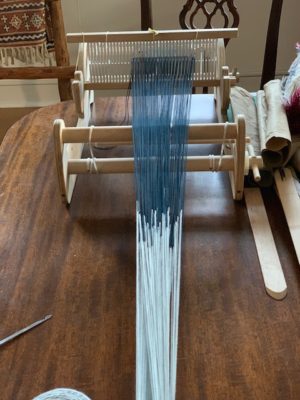 Direct warping is absolutely the way to go. This style of warping is becoming increasingly popular after Ashford released a pattern using a discontinuous warp using the direct method. I first encountered this technique used by indigenous weavers of Central and South America.

Threadings, such as Color-and-Weave, requires rapid color changes, and if using the direct method, would require you to do some moving around in the rigid-heddle reed to get the yarns in the right order. This can introduce crossed threads behind the heddle. Most of them are not traveling over more than one or two warp ends, so they are manageable during weaving. For this reason, I use the indirect method, but talk about how to adapt the direct method to these circumstances in Weaving 201 on colorwork.

Warps with Odd Numbers of Ends

Many weavers use the Fibonacci sequence to lay out their stripes, checks, and plaids. Most Fibonacci numbers are odd. This doesn’t lend itself to the paired system of the direct method, although you can use the cut-and-tie or alternative threading method to make it work. With plaids, this can be particularly tiresome, since you are making so many color transitions. For this reason, I prefer the indirect method.

Although any method will work, fine silks, other luxury fibers, and luxury blends like to be spun very fine and they can also can be a little sticky. Some folks like using the indirect method that employs lease sticks to thread the heddle when using these yarns. You may also find using warping sticks to pack the team is helpful.

I employ the same logic to these warps as I do with all the warps above. When using the direct method, you will always have a few crossed threads behind the heddle. They mostly become a problem when the apron rod pops up and over the back beam and you are trying to weave off those last few inches. If using this method, it is good to add on some extra loom waste so you can finish your weaving before the rod pops over the beam.

There is more than one way to thread multiple heddles. With the conventional method, the slotted ends travel through the same slot in one heddle and then divide so that one end travels in the second heddles aligned slot and then to the slot to its right. An alternate method has the slotted yarns traveling from the front to the in the same aligned slots.

The alternate method is easier to learn, particularly when tackling colorwork, however you can’t get a true plain weave and it increases the chances of the slotted ends twisting around each other.

The conventional method reduces the twisting of the slotted ends. This twisting is different from the crossed threads that can occur when during the direct method. 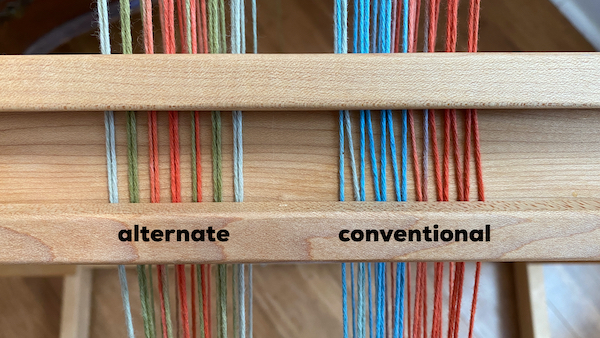 As an aside: Some weavers attribute the challenge of dense warps, such as doubleweave and twill, with crossed threads, but that really isn’t the case. Because the warp is very dense, you have to weave your header and a few inches of weaving to get the sheds to work themselves out. Colorwork can exacerbate this, but it isn’t the reason for the challenge of establishing the work.

To midigate these crossed threads altogether, you can warp the loom using the indirect method from front to back. I go through this in my video Slots and Holes. As mentioned previously, crossed threads can happen with any method, but they are much less likely with indirect than direct.

I know it is a lot to take in, particular if you are just beginning to build your weaverly know-how. The Yarnworker School Patrons and I have been beefing up our indirect skills with a class I created to celebrate our second anniversary. I just released this class in the Yarnworker School course curriculum as Weaving 202.

I love options and with weaving there are many. 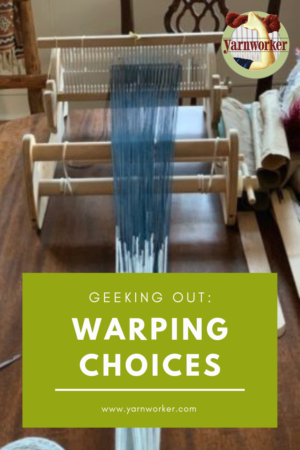 2 thoughts on “Geeking Out: Warping Choices”