If you are totally new to weaving with the pick-up stick on the rigid heddle loom, check out my latest Knitty column. I give a very basic primer on how it works and discuss how to weave warp floats. In First Fall edition of Knitty, I’ll address weft floats. 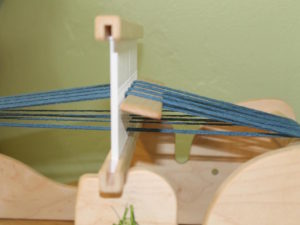 To weave weft floats, you place the heddle in neutral and tip the pick-up stick on its edge. You need to lay the pick-up stick flat and move it to the back to weave a clean up or down shed, making it less efficient. On many looms placing the heddle in and out of neutral is a bit of a pain. One notable exception is the Kromski, the neutral position on their looms is  super easy to get in and out of. 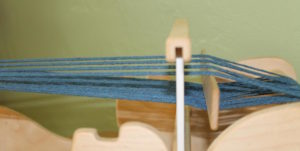 One way to work around this, if your loom allows, is to let the heddle hang in front of the heddle block instead of putting it in neutral every time. 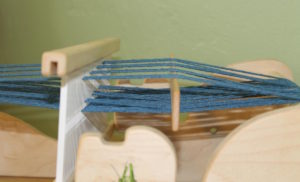 Most pick-up patterns are reversible, so whatever you weave on the front, the opposite configuration of threads will be worked on the back. For this reason, I often choose to weave warp floats, even if I want the face of the cloth to display weft floats. This way I don’t have to mess with that fussy neutral pick-up stick position.

It is in this vein that I set about weaving a series of honeycomb panels for curtains. Honeycomb is woven in offset blocks. You weave a set of floats and then change the pick-up stick arrangement to the opposite configuration and weave a second set of floats so the the blocks of floats are offset. If the pick-up order is 3 up and 3 down, then after you weave the first set of blocks, you need to replace the pick-up stick and change the order—3 down and 3 up.  The trick is that the blocks aren’t tied down, so one thread from the first block floats into the second, creating a wavy line. Shown is honeycomb with its two sides—warp floats on the left and weft floats on the right. 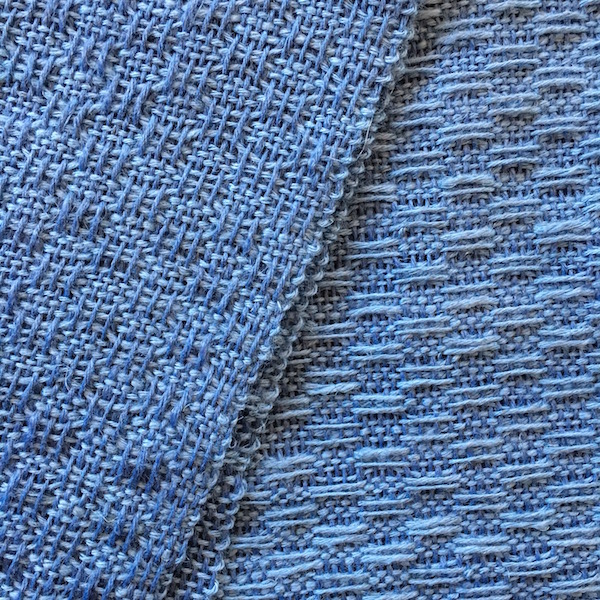 Most honeycomb patterns are written with the warp float weaver-side-up since that is considered the right side of the cloth.  Since this is my preferred method of weaving pick-up, I set about weaving it that way.

With honeycomb, you can’t leave the second pick-up stick in place and get a clean shed. You either have to place it every time you weave that part of the pattern or insert a heddle rod. I soon discovered that you can’t efficiently weave with a heddle rod for warp floats—no matter how long you make the string heddles they tangle and interfere with the up shed of the first pick-up stick. I reworked the pattern so I could weave it upside down.

Once again, weaving has taught me something.  Everything works in theory until it doesn’t and weaving upside-down is always an option.

P.S. If you want to learn how to combine warp and weft floats check out Weaving 301 at the Yarnworker School.

4 thoughts on “Pick-Up, When to Weave Which Float”