As I was editing the footage for the Yarnworker School’s next class on colorwork, it occurred to me that in weaving, there are many different kinds of sheds. A shed is the opening created when you lift or lower the heddle, creating a space to place the weft. The term is a variant of an Old English word that means “to set apart”.

Down Shed A down shed is created when the heddle is tucked under the heddle block, in the “down” position.

Up Shed An up shed is created when the heddle is on top of the heddle, in the “up” position.

Changed  Shed When the heddle changes position to the next shed and you have yet to place a weft, it is called a “changed” shed. (photo on the left). You will also sometimes hear this referred to as a closed shed (see below) When you change from one shed to another, the warp yarns change position and capture the weft pick woven in the previous shed. You may hear the instruction, “beat on a changed shed”. This is most often done when weaving with a belt shuttle or if you are using a supplementary beater. To do this you would press the yarn into place as you normally would, change sheds and then beat again using the shuttle or beater. When you beat on a changed shed, the yarn is less likely to spring back into place before you weave the next pick.

Closed Shed When the heddle is in neutral. You can also beat on a closed shed although the yarn is more likely to spring back than when beating on a changed shed.

Same/Open Shed This one is a bit tricky as it is the same as a closed shed, expect there is yarn present (photo below on the right). For instance, when instructed to “work the join in an open shed”, you do all the actions required without changing to the next shed. Then, once the work is complete, you press the yarn(s) into place and carry on.

Clean Shed If you have warp threads that aren’t staying where they should, this can cause you to lose a clean shed. For instance, say you used a fuzzy yarn in the warp  and when you change sheds, a warp yarn or two that should be down is traveling with its neighbors up. This can cause you to weave a float where you don’t intend for there to be one. This can also happen if you don’t pick up your threads correctly on a pick-up stick or if you don’t push the stick all the way to the back. Any of these scenarios would result in a messy shed, although you don’t really hear it called that.

Additional Sheds It is worth noting that by using a pick-up stick you can create additional sheds that break the over/under interlacement of plain weave. “Up and Pick-Up Stick” and “Pick-Up Stick” are examples of these different sheds.

If I forgot one, let me know. 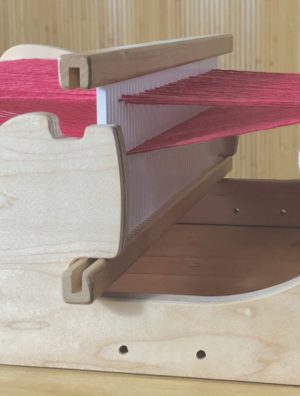 8 thoughts on “Geeking Out: Sheds”