Yarn selection and sett are at the heart of what makes woven cloth great. When pondering the question of sett, fabric design, and yarn substitution, an underused resource by rigid-heddle weavers is a sett chart.

A sett chart is a list of yarns described in generic terms, their yardage, and a range of suggested setts. For decades Handwoven magazine has maintained their Master Yarn Chart. This chart lists most of the yarns used in the magazine throughout its long history. You will also see other, shorter versions of this chart pop up in the back of your weaving books, or as a resource on yarn retailers’ websites.

Most sett charts are organized by fiber, and within each fiber type the yarns will be listed by size. For example, here is the entry for 8/2* unmercerized cotton from Handwoven‘s chart, a common yarn used by rigid-heddle weavers to make towels. It lists the generic name of the yarn, its yd/lb and m/kg, and then there are three numbers that follow. The first number is its “open” or wide sett, appropriate for lace weaves. The middle is the balanced plain weave (BPW) sett, often referred to as its plain weave or tabby sett. The third number is its “close” sett, often called a twill sett. These expressions assume that you are warping and weaving with the same yarn.

The Handwoven chart has the added bonus of offering you a yarn scanned at its actual size, so you can place a yarn on top of the scan and make a physical comparison. If you are looking at the chart online, you want to be sure that you are looking at it at 100% to get an accurate reading. The scan shown here is slightly enlarged and not an accurate portrayal of the yarn’s size.

We rigid-heddle weavers tend to think of sett in terms of that middle number, or plain weave sett, but that it is just one way to sett a yarn. Yarns can be sett in all sorts of ways to get the look you want. Here is an example of how I used a sett chart to make decisions.

During the Spring 2018 Yarnworker Weave-Along, we are weaving the Linen Facecloths from Handwoven Home. My goal for this project was to create a linen cloth using a windowpane structure. Windowpane is a pick-up pattern where warp and weft floats outline little cells of plain weave. To create a deeper cell, I wanted to use the thicker yarn for the floats and the thinner yarn for the plain weave areas. To decrease snagging, I selected a sett of 12 that would create the smallest float possible among my sett choices of 8, 10, and 12. 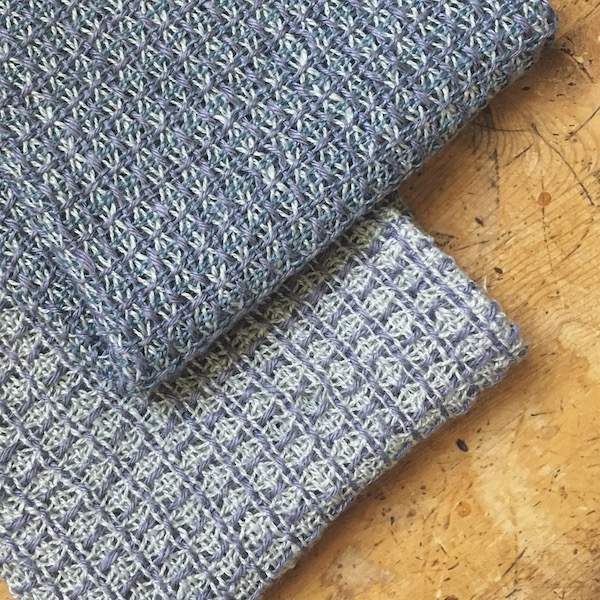 Sett charts tend to be more accurate than wraps-per-inch tests. If you want to make a yarn substitution, scan the sett chart to see if you can find something that matches the original yarn, check out its specifications, and then start comparing them to yarns you may want to substitute.

You Still Have to Know Things

It is true that you have to know things to make the best use of these charts. As I discussed in my Yarn Substation blog post, when substituting yarns, you want to make sure that you are matching apples-to-apples, comparing similar yarns in size, content, and style as much as possible.

The yarns in these charts are described in generic terms and are mostly comprised of yarns designed for weaving. Knitting yarns have different put-ups so you may have to translate the yardage information on the label to yd/lb or m/kg to make comparisons. Yarns designed for knitting often have less twist or may be preconditioned, so even if they are the same size as the yarn on the sett chart, they may act differently.

Numbers don’t have to be an exact match to work, there is some wiggle room. For instance, in our example, the thick and thin yarns could have a suggested sett range anywhere from 12-16 and you will most likely get similar results.

Yard-per-pound  or meters-to-killograms doesn’t have to be an exact match either and you will often find variations in the numbers from a sett chart to a yarn retailer’s site. As a broad generalization, you can have a deviation between 100-150 yd/lb or the metric equivilant, and still be close enough to make a good match.

You can also select yarns made up of different fibers with similar setts, knowing that the take-up and shrinkage might be a little different. When doing so, I try to stay within the broad categories of matching cellulose to cellulose and protein to protein.

On a related note, this is another reason why I love the sett checker. It shows me the yarn, not in terms of one sett, but in three. This is similar, but not exactly, the same as a sett chart. The checker is a fixed relationship to the setts available to rigid-heddle weavers and the chart is a range of expressions based on the yarn itself.

There is so much to know about yarn, and this is very good news. You will never get bored. Occasionally befuddled, but never bored.

*Those funny little numbers associated with weaving yarns that look like fractions are an expression of the Count System. I covered the Count System in both my books. Check out pages 14-15 of Weaving Made Easy, and crazily enough, on the very same page numbers in Handwoven Home, 14-15. Many moons ago, I produced a video for The Woolery that explains how the count system works.

P.S. Patrons, if you missed our seminar on sett last month during the anniversary celebration, I covered a wide range of topics related to sett, including how to use a sett chart. 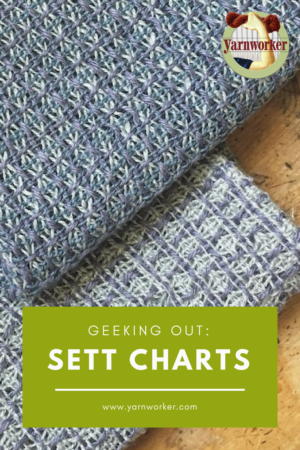 4 thoughts on “Geeking out on Sett Charts”