The question of how to modify your threading in a rigid-heddle reed to alter its sett comes up from time to time. Similar to the floor or table loom reed, the threading of the rigid heddle determines how many warp ends you have in an inch of warp.

The heddles in both styles of looms are what allows you to lift and lower the threads to form the shed. The reed and the heddle are two separate pieces in floor looms, with the reed determining the density of the warp, and the heddles determining the structure of the fabric. The rigid heddle serves as reed, heddles, and harness in one integrated piece. 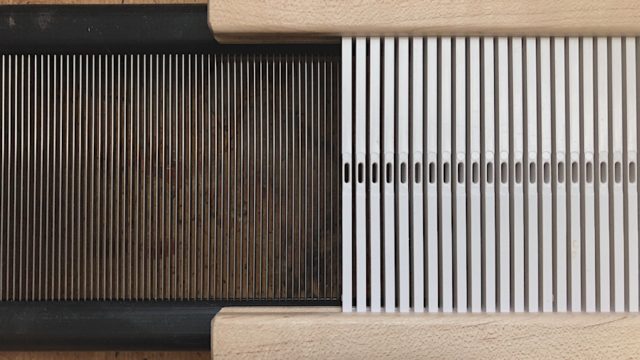 It is common for floor loom weavers to alter the threading of their reed to accommodate different setts. This is a little trickier with a rigid heddle. The slot and hole construction of the rigid heddle is the genius of this little loom. If you change the threading of the rigid heddle, you still need to maintain the slot/hole ordering of the threads in order for it to function properly. (The exception to this rule is if you want to create open spaces in the warp by skipping slots or holes. This will form a float or gap in your weaving.)

Making a More Open Sett from a Finer Rigid-Heddle Heddle

You can decrease the sett size of any rigid heddle by skipping slots and holes. To do this, start with threading a slot, skip a hole and a slot, and thread the next hole. Then skip a slot and a hole and thread the next slot. Continue in this manner until you have threaded your weaving width. You would think this would decrease the sett by half, but it actually reduces the sett more than that depending on the size of the rigid heddle. It is good to check to be sure you get the density you are looking for. For instance, if you use this method to alter the threading of a 12-dent rigid heddle, you will get a sett of 4. I talked about this method in the Simply Striped Rug weave-along. The section of this video begins about 2:09 minutes in, where I talk about modifying the threading of a rigid-heddle reed to decrease the sett.

Making a Finer Sett from a Larger Rigid Heddle

Most rigid-heddle weavers have already figured this one out. You can double or triple the number of ends in a single slot or hole to increase the density of the sett. The resulting fabric isn’t sett thread-by-thread, but it gives you a similar look and feel.

Shown below on the left is a fabric sett with the ends doubled in a 12-dent rigid heddle to achieve an effective sett of 24. To the right is a fabric sett singly in two 12-dent rigid heddles, to to get a true sett of 24. The fabric on the left has the look of basketweave and is slightly thicker, with a little less drape, than the one on the right. 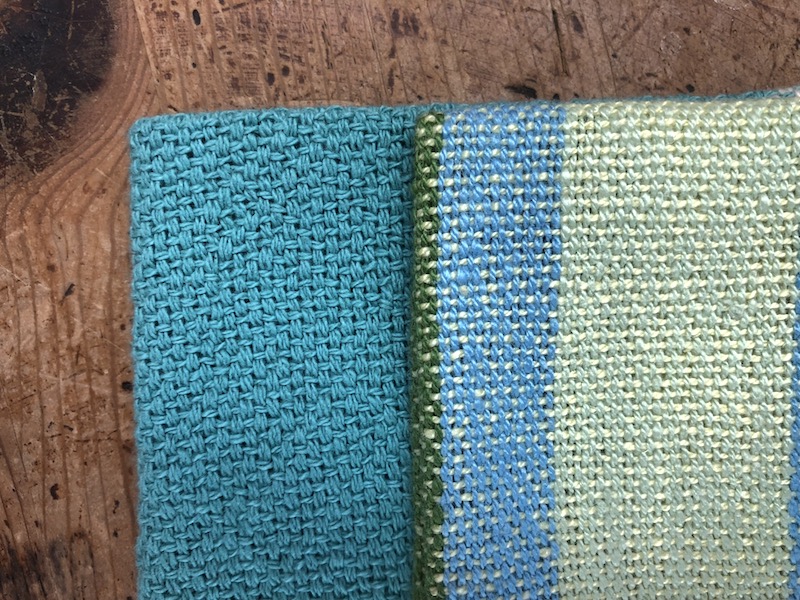 You can alter the density across the warp. For instance, if you want a sett of 15 from a 12-dent rigid heddle, you can thread 2 ends in a slot or a hole, then thread a single end in the next five spaces and then thread 2 ends again. This method does not result in quite the same fabric as it would on a floor loom, but the functional density will be close. The areas where you have doubled ends will form little ridges, which is a nice look unto itself. I strongly recommend sampling first before weaving a large piece using this method, just to be sure you are going to get the fabric in your mind’s eye. 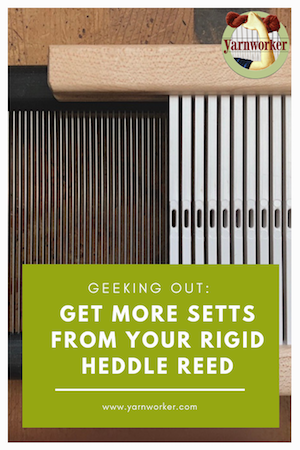 1 thought on “Geeking Out: Get Multiple Setts From a Single Rigid Heddle Reed”