Last week, I wrapped up my first semester of teaching at New Mexico Technical University.  It was the first time I’ve had the opportunity to meet with the same group of students week after week. In addition to the University students, the class was open to community members, including high school students, so there was an amazing mix of thinkers in the room—from experienced floor loom weavers to Alpaca breeders.  Teaching in a technology environment also meant there were a number of “binary” thinkers that got the power of patterning right away. We had some really interesting conversations while tackling all the basics of weaving as well as pick-up, tapestry, and project design.

A number of the students chose to weave the Dealer’s Choice Towels on the cover of the revised edition of Weaving Made Easy. 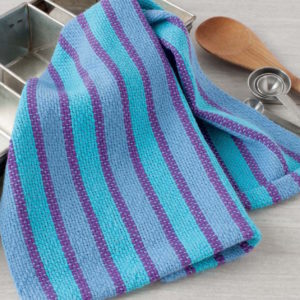 This led to the discussion of how to best warp stripes with an odd number of ends if you are using the direct warping method. (Since the publication of this post, I released Weaving 201 in the Yarnworker School that takes a deep dive into the subject of color-and-weave using the cut and wrap and the alternative threading method, both are handy for doing fancy colorwork using the direct method.)

I am a dyed-in-the-wool warping board enthusiast. I’m too lazy to do all the set up for the direct method and I find that the indirect method is more versatile. However, if the direct method is your warping style of choice, you are going to have to find a way to deal with complicated color orders. The stripes in the Dealer’s Choice Towels are not complicated, but the accent stripe is an odd number of threads, which can pose a challenge.

If my warp is relatively narrow—say 15 inches or less—this is one way I get the job done:  I start by following the color order, and where there is an odd number of ends in a stripe, I’ll go ahead and warp an even number.  In this case, the ultimate goal is stripes of 3 ends between stripes of 8 ends, but I’ve warped 4 ends of the accent strip. 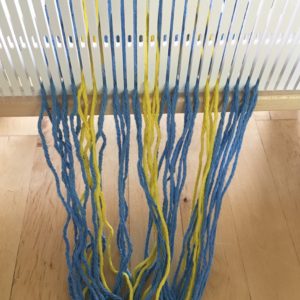 Next, I wind on and begin threading my holes as I would normally, working from one selvedge to the other. In this case, I am working left to right. 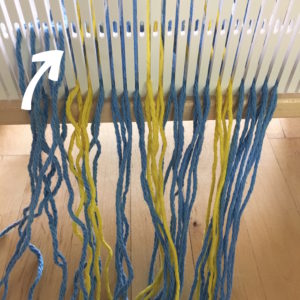 When I get to the accent stripe, I warp one slot end in a hole and then I “throw away” the other end, letting it hang off the back of the loom. 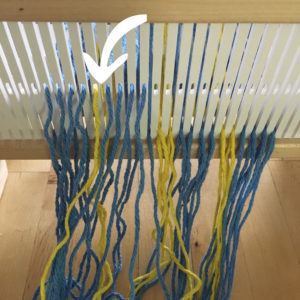 Then I work the next stripes in the opposite direction of the first, right to left. 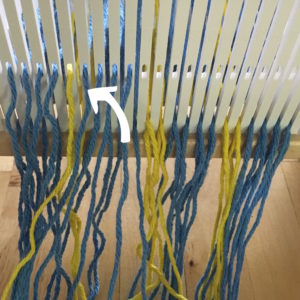 When I get to the fourth end of the of accent stripe, I throw it away. 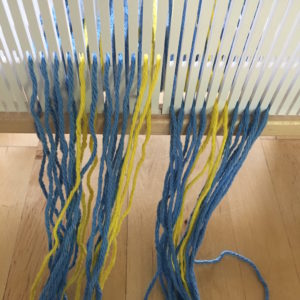 You will now have an empty slot and a hole. Keep working in the same direction—to the left—filling in the slots and holes accordingly and throwing away ends as needed. You are going to have to move some of the threads in a slot to fill in the gaps. 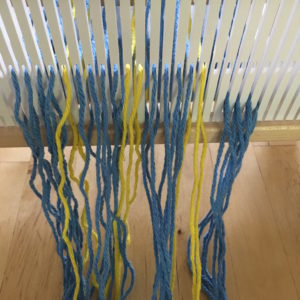 Once you have warped the loom, you will have a number of warp ends hanging off the back of the loom.  These will work their way out as you weave. 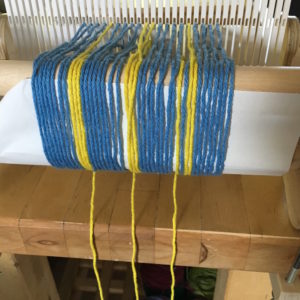 One thing to note about this method: The yarns hanging off the back are no longer connected to the apron rod. This isn’t a problem until your rod pops over the warp beam and typically by that point you are done weaving. If they become slack you can tie them back on the rod.

You also need to start off center to adjust for all the moving about and extra slots needed.If you are trying to warp a 15-inch fabric on a 15-inch loom, then I double up the odd number of stripes, adding four ends or two loops in the accent stripe slot and adjust accordingly.

If my warp is wide, I go ahead and cut and wrap the stripes (see P.S below.)

Another option is to change stripe width all together and just use even ends.  This student’s Fiestaware inspired towels are all on the same warp, the only thing that changed is the weft color. Check out how the weft color shifted the appearance of the stripes in each towel. Nifty! 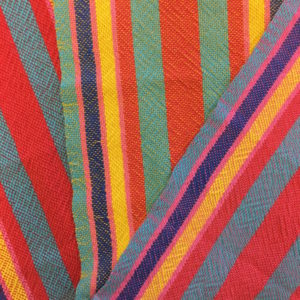 Another student used the same colors that appear in the book for the wide stripes , but changed the accent stripe and weft color. Cool, huh? 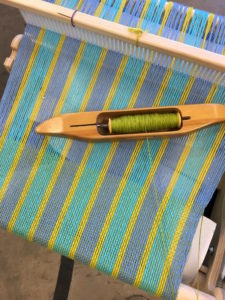 A big shout out to Brian, Nisa, Emily, Miranda, Glenda, Teghann, Gil, David, and Susan for a great semester.

P.S. (added 6-30) I neglected to note that this entire exercise was to avoid cutting and tying the warp at each odd stripe.  You can “cut and wrap” the warp for odd stripes.  To do this you bring the odd numbered end through the slot as usual. Then cut and wrap the yarn onto the peg.  Then add in your next color by threading threading a single end into the same slot from the back and wrapping it around the peg. It is now positioned to be worked as usual by warping around the back apron rod and threading pairs through the slots for your desired number of ends, continuing to cut and wrap as necessary to get your correct color order. Each method takes a bit of extra yarn so plan accordingly.  To learn more abut colorwork, check out Weaving 201 at the Yarnworker School. Happy Warping!

5 thoughts on “Even your odds: Warping Stripes”