I’m delighted and a little overwhelmed that so many of you are joining me for the Doubleweave Throw Weave-Along (DWWAL)! We are nearly 150 weavers strong!

As you know, necessity (i.e. a train wreck) has offered me the <cough> opportunity <endcough> to reweave some of my teaching samples.  On a whim, I thought, “Why not invite folks to join me?” I decided to start with the throw from Double Your Fun since there is a pattern included with the video and the video itself is geared toward weavers who have woven a few projects, but have yet to weave with two heddles.

This is my first time hosting a Weave-Along, so I’ll be learning right along with you. During the month of September, I’ll check in at least once a day to offer a virtual high-five and to answer questions in the Facebook Group and on the Ravelry thread. I know there already exists some experience “in the room” and I’m counting on you to be excellent to one another and help each other out, particularly since we are spread out over many time zones.

Since there are some seasoned weavers among us, I didn’t limit the WAL to just the pattern included with the video. I’m assuming if you are doing something other than the throw in the video, that you have the skill to either substitute your yarns or design your own pattern.

If you purchased a kit from Cotton Clouds, they put together this chart to outline which colors are warp and which are weft in the alternate colorways. If using an alternate colorway, assign one alternate warp color for each of the warp colors in the pattern. Whatever warp yarn is threaded in the holes in the back heddle (Heddle 2) will appear on the top as you weave.

The pattern is not included with the kit.  There is a PDF of the pattern included in the video—DVD and download.

PLEASE NOTE:  There a few errors in the pattern, my humble apologies.  The two mistakes in the warping section are underlined noted below with the appropriate tip. There is also a sticky/pinned posts in the Ravelry and Facebook groups. Here is a link to the errata.

Some of us learn by reading, some by hearing, some by seeing, and some by doing.  Between the pattern, video, getting your hands on your loom, and these extra blog posts, we should have most of your styles covered.

In my experience, folks come to threading two heddles with a lot of assumptions. If this is your first time warping, clear your mind and take it one step at at time.

What follows are two common issues that I see come up when threading two heddles.

Lining up the heddles

To review, Heddle 1 is in the front and Heddle 2 is in the back.

You thread Heddle 2 first and then Heddle 1.  The most important part of the whole process, is lining up the first thread from Heddle 1 to Heddle 2.

In some looms, the rigid heddle can shift back and forth slightly between the blocks so make sure that you line up the heddles so that the same corresponding hole in Heddle 1 is in front of Heddle 2.

Working from the front of the loom, thread the first yarn in Heddle 2 through the slot to the right of the corresponding hole in Heddle 1. If your heddle hook is long enough, I find it helpful to put my hook through both holes to make sure they line up. 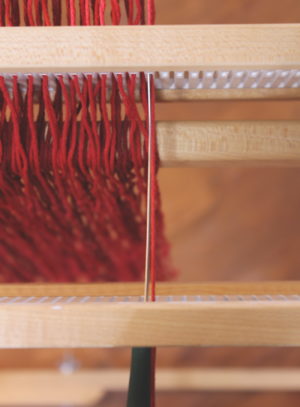 Note: Step 4 of the pattern says to move the thread to the left of the hole, but that is if you are threading while stationed at the back of the loom, not as I recommend and demonstrate in the video threading while at the front of the loom.

After you have aligned this first thread, you can then proceed threading Heddle 1 as instructed.

I like to lay the 4 threads in each sequence from Heddle 2 on top of Heddle 1 as I work. Shown here is the first 4 yarns threaded and the next 4 pulled out and ready to thread. 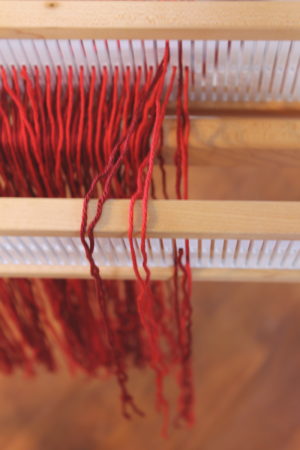 Pro tip: After you have warped a few 4-step sequences, you may figure out that you can thread the first two threads in the sequence at the same time.

Placing the pick-up sticks is part of the warping process.  The sticks are what will give you your extra sheds and by placing them you can tell if you made any threading errors.

To review, when charging Pick-Up Stick A, you place the heddle in the down position to push the threads in the holes below the slot threads.

Now note that the slot threads are grouped together in pairs. You are going to pick up every other end, starting with the first end of the right thread in each pair.

The pattern will actually work no matter which end you pick up, however if you pick up the Berry threads the warp layers will be a mix of both colors colors.  Since we are mixing colors in the weft, too, this might give you an interesting color effect.

Test out your four weaving positions

Heddle 2 Up (Upper Layer in Red or alternate color)

Pick-up Stick A (Upper Layer in Red or alternate color)

Heddle 1 Down (Lower Layer in Salmon Berry or alternate color)

If you can’t get a clean shed when using Pick-up Stick A, it is most likely caused because the threads were inadvertently crossed while placing the pick-up stick. No worries, it is easy to start over and pick them up correctly.

To prevent this from happening, leave the heddles slightly separated as you work to make it easier to see if the threads are crossed or not. Shown here is a the picked up end that is crossed between the heddles in the red colorway. I know the colors are close and it may be hard to see. It will jump out at you when you are looking between the heddles of your own loom. 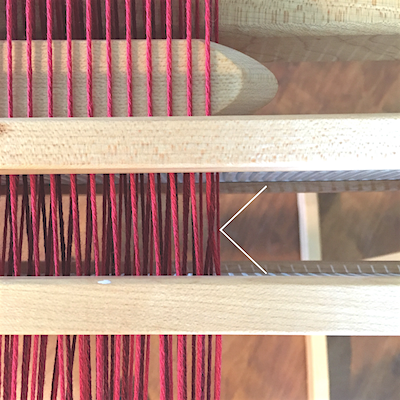 I have a distracted mind. When I was first learning to warp two heddles, I would get totally lost threading Heddle 1, mostly due to “squirrel” syndrome, or the tendency to get easily distracted by shiny objects or “shiny” thoughts.

To keep my rhythm, I thread the four steps before I would let myself disengage with the process. Sometimes I would have such a distracted mind, I would have to start over. It happens, don’t fret, just think of it as wiping the slate clean.

To your looms, weavers! Let’s get warped!