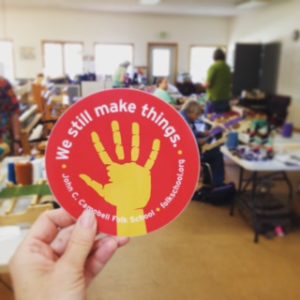 Since the industrial revolution, craft revivals come in waves, the Arts and Crafts movement of the 1880s, the Southern Craft revival of the 1930s, the back to the land movement of the 1970s, and the modern DIY movement that began in the 2000s.  I’m fascinated by the cyclical nature of this phenomena of remembering, reinvention, and rejection.

At the heart of the Southern Craft revival are a handful of weaving centers that were all founded on the principles of economic development and cultural preservation in Appalachia. Berea (Kentucky), The Weavers of Rayburn now The Hambidge Center (Georgia), Penland, John C Campbell Folk School, Crossnore, Allanstand (North Carolina), and Arrowmont (Tennessee) are examples of these enterprises.  When these schools and centers were founded they created a way for the remote population of Appalachia to sell and teach traditional crafts—coverlets and other woven goods, carvings, basketry, pottery, metal work, musical instruments, and the like. Last week I taught at one of these schools.

John C Campbell Folk School was founded by Olive Dame Campbell after her husband died, realizing their shared dream of founding a school to preserve the mountain culture they had grown to love.  Olive was a collector of songs, carefully documenting the tunes she learned traveling with her husband John C. in the remote areas of Missouri, Alabama, Georgia, Kentucky, North and South Carolina, Tennessee, Virginia, and West Virginia.

What the Campbells seemed to do exceptionally well was to ask good questions and then listen to the answers, a rare quality in those traipsing into lands unknown to them.  The local folk told the traveling Campbells time and again that they wished for a school where they could learn, but not be graded to determine who was the best. (Lest you think this was a sense of utopia, as best I can gather it was because in competitive situations, someone was likely to get shot.  Being a southern myself, I can see the danger.)  Olive saw the potential in selling the locals’ work after chatting with some men whittling on the front porch of the country store.

Teaching students in this unique environment where laughing is the most important element in the classroom felt like being a part of something important.

If you are interested in learning more about the region, Philis Alvic wrote a lovely book on the history of these centers.  Spend a few extra days in Asheville and take in the weaving highlights including The Homespun Museum, Earth Guild (the oldest weaving shop in the area, there are also lots of nice yarn shops), the Folk Art Center on the Blue Ridge Parkway (home of the Southern Highland Craft Guild), The Center for Craft, Creativity, and Design (former home of FiberArts magazine and Lark publishing), and a whole lot of good beer and food.

The Folk School and I have a tenative plan for me to come back next year and do more teaching, learning, and laughing.