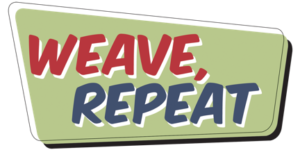 Every two years I send out a survey to get a feel for where rigid-heddle weavers are on their weaving journey and what specific issues they may be experiencing. Feedback from these surveys helped start the weave-alongs and prompted me to create specific content, most recently, A Weaver’s Guide to Yarn.

First a Bit of Celebration

The last time I sent out the survey, the Yarnworker School was just a twinkle in my eye. For the past month, the Yarnworker School Patrons and I have been celebrating the Yarnworker School’s second anniversary, something they made possible. I offered an indirect warping masterclass as an anniversary gift that we have been weaving along to and I’ll release it to the public soon. As a now-established annual tradition, I also create party favors for our anniversary celebrations. This year I introduced a new enamel pin and sticker embedding the School’s philosophy of weave, learn things, repeat. I also collaborated with Purl & Loop to create a new Heddles Up! pick-up stick for the Swatch Maker Looms and dark and light wood variations of the Sett Checker, making it easier to find contrast with dark and light yarns. (Patrons your party favors are in the works. Super Supporters and Regular Readers, remember to place an order by July 14 to receive the favors since I don’t have your mailing address on file.) I’ll be sending a new survey to the Patrons for them to vote on our next two weave-alongs of 2019.

During the celebration, I dug deep into the latest survey and shared my thoughts with Patrons. I went into a lot of detail how this feedback can shape our future weave-alongs and classes. I’m sharing the highlights with everyone who checks into this space.

This year, I compared the answers in three ways: everyone, patrons, and non-patron responses. I was curious to see if there was a difference between the boosters of the school and those who either participate in weave-alongs or who read what I put out in the world. Generally speaking, there wasn’t. While patrons and non-patrons differed some, the overall responses were similar.

Thanks  to all who carved out a little time to take the survey. I received nearly 500 responses. Yvette James was the lucky winner of the swatching bundle. Following is a brief overview of the responses. I’m not a professional survey designer, so take all this information with a grain of salt.

Weaving width
Over 80% responded that they have an available weaving width of 20” or more, with slightly more non-patrons having only smaller widths—15” or less. (I include weaving width adaptations in the weave-alongs and tend to skew the classes towards narrower widths since they are more technique-driven.)

What you like to weave
Wearables and Cloth for Kitchen and Table are neck-and-neck as the most popular projects, with Household Goods and Sewing coming in 3rd and 4th respectively. Freestyle/Saori weaving is slightly more popular among non-patrons. Tapestry and Wall Hangings were lower priorities.

Where you get your weaving inspiration
Books and YouTube are your go-to resources for getting extra support, with well over a 70% response rate. Facebook, blogs, online yarn suppliers, and online classes were in the next grouping, with about a 40% response rate. Patrons differed in this one area—online classes received a 76% response rate (I think I know why ☺.) Instagram, Pinterest, and Ravelry all received about a 30% response rate while in-person classes and local yarn shops came in at about 20% or less. There are fewer of them, so that makes sense. I made the same mistake I did last survey and forgot to put magazines on the list, *head smack*, but they made a good showing in the write-in section.

What keeps you from weaving more?
Fear, confidence, worried about wasting good yarn, yarn knowledge, lacking basic skills, topped the list, with time, money, and space being a constant challenge.

What do you wish there was more of in the weaving world?
A lot of these answers mimic the ones in the extra support column, but there were a few themes that emerged that were separate from specific techniques. Patterns, inspiration, community, local resources, and rigid-heddle specific magazines were mentioned a lot. A Ravelry-type community for weavers was mentioned a few times. Did you know there there is something similar called Weavolution? Rigid-heddle acceptance in the wider weaving world was also mentioned multiple times.

Diversity was also mentioned in a couple of different ways. The yarn world has been grappling with a larger discussion brought to the forefront by BIPOC, LBGTQ+, and other yarn folk who have been sharing their lived experiences about lack of inclusion, diversity, and bias in the yarn community. It is a hard conversation and one that is long overdue. I firmly believe that cloth has a point of view, the more views in the room the more interesting the cloth. As an educator, I hope I can set an atmosphere that makes all welcome and I still have a lot to learn. I’d like to take this opportunity to share some of my personal thoughts on the issue.

Where you need extra support
There is a lot more granular detail that I went into with the patrons, but overall in order of most mentioned these are techniques where you would like support: doubleweave and other two-heddle weaves, specifically finer fabrics, and more complex structures; pick-up; reading drafts and translating them to the rigid-heddle loom; sewing/yardage; fundamental skills; weft- and warp-faced fabrics; freeform weaves, and wearables that don’t involve sewing. There was a smattering of other techniques and projects mentioned that I’ve also taken note. 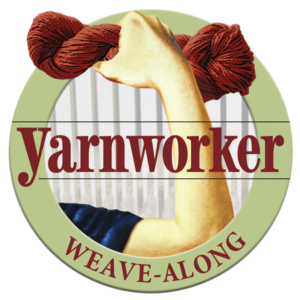 What’s Coming Up at the Yarnworker School

We have tackled a number of these most-mentioned techniques at the Yarnworker School, and there is more to come. (Patrons, look to your index for a map of the Yarnworker World.) I have some ideas that I’m floating past the Patron producers who will vote on the next weave-along that will offer some of the doubleweave/two-heddle, and fundamentals support. The next Yarnworker Class is on pick-up. We will take a really deep dive into this technique including fundamentals and design. Patrons will get an early release weave-along opportunity this summer and the class will be released to the public in the fall. I’m working towards a more comprehensive class on reading drafts and translating them to the rigid-heddle. It is slow work, but it is inching to the top of the list. For an overview, check out this video on my YouTube channel.

Where Else to Look

Here are a few resources for things that I won’t be getting to quickly.

Machine sewing is just not my jam. If it is yours, I highly encourage you to take a look at Sarah Howard’s patterns in her Get Weaving Etsy shop. She designs them specifically for rigid-heddle weavers. Sarah Swett has been taking a different approach to garment construction with her popular Sarah-Dippity Skirt and her recent blogging journey to create a linsey-woolsey shirt.

Color and weaving came up quite a bit. Tien Chiu of Warp & Weave just released a new free digital color tool on her site. At her request, I reviewed her Color Courage class and it is excellent. Geared towards the floor loom weaver and fine yarns, there is still a lot here for rigid-heddle weavers, and she offers a free mini-version of the class. My colorwork class is more about the work it takes to manage color, and while I give a few tips on color selection, Tien gives way more detail. Another colorist/dyer/weaver who has added rigid-heddle weaving to the mix is Felicia Lo Wong of the School of SweetGeorgia. She uses more fine luxury yarns that popped up in the survey quite a bit and are so abundant in knitters’ yarn stashes.

For those who would like to explore freestyle Saori-type weaving, I found this video by Ashford, featuring Esther Rodgers enlightening. Amy McKnight is a new emerging voice, and she started a blog on freestyle weaving, which has a number of interesting post. Her thing is creating yardage and she is a sewist, so I’m excited to see what’s to come in this space. Debbie Held wrote a blog post for Schacht on Freeform, Saori-inspired Weaving on a Weaving on a Cricket that also provides a starting place.

For those interested in tapestry, I got a sneak peek at Rebecca Mezzoff’s little cartoon book of tapestry techniques, and it is an excellent quick and charming reference to the methods of creating discontinuous weft pieces. Keep an eye out for its re-release. Rebecca also offers classes, writes an informative blog, and hangs out on social media. Although she doesn’t use a rigid-heddle loom, if you want to explore more tapestry work, she is an excellent resource.

This is not an exhaustive list by any means, I try to keep my Resource page on my website up-to-date with all the rigid-heddle weaving resources that I’m aware of. Let me know if there are any I’ve missed.

I’m putting on my thinking cap and will confab with the Patron community and survey the Patron producers on future weave-alongs. If you support rigid-heddle weavers, perhaps this information will be useful to you, too. We can never have too many weavers.